The year 2020 is coming up roses for mezzo-soprano Beste Kalender, who grew up in Turkey and moved to Canada at the age of 22 to pursue two great interests – post-graduate research in the psychology of musical cognition, and professional singing. One of those is now clearly taking over, and the current year is marked by gigs that she finds particularly meaningful. “I hope I won’t be just a singer who sings pretty music and has no other interests,” she says when we meet in the RCM cafe, deserted for the long weekend. Our voices are ringing in the empty space but the security guy on duty doesn’t seem to mind us being there. “I’d like to be able to engage with larger issues and causes. And have my own distinct voice. This year feels like I do.”

One of those larger causes is cross-cultural collaboration. Last month, Kalender performed as a soloist with Sinfonia Toronto in Musical Bridges: Komitas@150, a program of Armenian, Turkish, Azerbaijani, Hungarian and Greek music conducted by an Armenian-Canadian, Nurhan Arman. Komitas – composer, Orthodox priest, ethnomusicologist, and the first Armenian national music systematizer – was born in the Ottoman Empire in 1869. April 24, 1915, Komitas was among more than 200 prominent Armenians rounded up by Ottoman/Turkish forces and deported from Istanbul to Ankara. Unlike most of the group, he survived, but he had a breakdown, was moved between military hospitals, and ended his life in a Paris asylum in 1935 a broken man. “This concert is about celebrating Komitas, and it’s about celebrating peace and always working to keep it”, says Kalender. “I’ve listened to a lot of Armenian music alongside my Armenian friends at the Conservatory in Istanbul, and loved it. Our musical traditions share so much.”

Istanbul is a diverse city which easily breeds cosmopolitans, and the Turkish-Canadian mezzo is one of them. She grew up in a liberal family and, parallel to attending the Music Conservatory, also went to Boğaziçi University, founded as Robert’s College in 1863, the then only American-run university overseas. “I would go to the European side of Istanbul for the psychology classes in the morning and cross the Bosporus Strait to the Anatolian side of Istanbul for the classes at the Conservatory in the afternoon,” she says of her youthful, pre-Canada years. “It was busy and fun.” She came to Canada to work on a PhD, on an invitation from the University of Toronto. The research-heavy master’s degree she completed fast, but getting into the Glenn Gould School made her put a pause on the PhD, although she enjoyed the work. She would spend a lot of time in the soundproof booths of the U of T’s Mississauga campus, she explains, researching complex and simple meters and how people who speak different languages perceive metre and tonal structures differently. It was a mix of linguistics, music and psychology that she can see herself returning to later in life. But singing kept interfering.

She got her first big break in 2015 at the Calgary Opera, where she was scheduled to sing Mercedes in Carmen. The mezzo who sung Carmen fell ill with flu just as the run opened, and Kalender had to jump in on short notice. “I said to myself: if you enjoy this and if it works out, then you’re leaving academe. I had the best time ever on stage. So I thought, okay, let’s try this seriously, let’s go for it.”

By that time, she was also married. She had met her Lebanese husband at U of T, where he was working on a master’s degree in Engineering. Between Arabic, Turkish and English, what language do they speak at home? She responds that the linguistic barrier probably made them work more on the relationship: “That’s how our marriage has been a success these eight and a half years. Certain things get lost in translation … which is not always bad. But we keep working on figuring out the between-the-lines – the unsaid in the said. That took some time.” 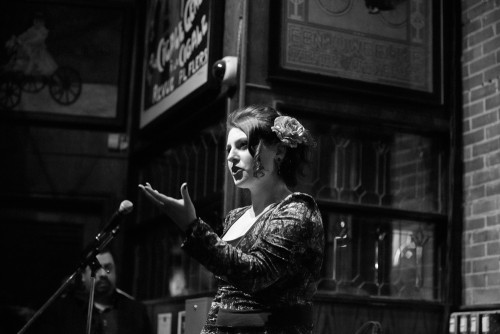 Kalender will be spending March in Alberta while preparing for the role of the Old Lady in the Joel Ivany-directed Candide at the Edmonton Opera. (“I will actually be singing the line I am so easily assimilated,” she laughs.) Back in Toronto in April, rehearsals, with the same director, begin in a very different project: Against the Grain Theatre’s final version of the Kevin Lau-composed Bound, the story of four characters in a brush with law enforcement and the arbitrary rules at border crossings. Kalender’s character is based on a true story of a professional Middle Eastern woman being asked and refusing to remove her hijab at the point of entry into France. “Border crossings is a topic we don’t talk a lot about in Canada,” she says, “and when I saw an earlier version of Bound I was grateful that these guys decided to tackle it.” Kalender became a Canadian citizen last February, and before that travelled on her Turkish passport as a Canadian permanent resident, which sometimes made things complicated. One year, on her way from Canada to Moscow via Zurich Airport for a singing gig, she was taken out of the queue and held at the airport because the airline staff in charge were not able, or willing, to verify that she did not require a work visa for Russia. When eight hours later they finally realized their mistake – thanks to a network of frantic phone calls between Turkish and Russian consular offices across two continents – she was allowed to board the next available plane to Moscow. She landed in the Russian capital at 4am, and went straight to rehearsals on little or no sleep.

The character she will play in Bound is held at a border for a different reason, but she and Kalender have one thing in common: their faith. Kalender is a Sufi Muslim who decided early in life that the headscarf wasn’t for her. There are countries in the world where not wearing a headscarf in public will get a woman in jail: where does she stand on this question? “Actually, when I was university-age, wearing hijabs in places like parliament and school was forbidden by law,” she says.

(An aside: I pause here to remind the reader that Turkey’s path to secularization commenced after the demise of the Ottoman Empire and the end of the First World War, under Turkey’s first republican president Kemal Ataturk, and was at times more top-down than it was productive.)

“But in my school, Boğaziçi University,” Kalender continues, “our professors didin’t occupy themselves with how you look. So some people would wear a hat over their scarf, for example … and the administration didn’t police clothing. But in other state universities, this rule was enforced. In today’s Turkey, it’s a matter of free choice. You can wear a hijab in school if you wish.”

“In my opinion,” she says, “to order a woman to put on a scarf or to take off the scarf, they are the same thing. It means forcing your opinion on them. And it’s generally men who decide this – while I’m happy for women to be able to decide that for themselves. If it’s the government deciding for you, or members of your family, it’s coercion.” Kalender tried a hijab on for the very first time only last year – in preparation for the role in Bound. “I had a relative who wears a hijab visit me recently in Canada. One day we were talking and I told her about this role, and asked her to show me the different ways of doing a hijab. She said, ‘Beste I thought you were against it,’ and I told her, well yes, I don’t think my religion is about that. I am a religious person – but not a conservative person. I really believe in Sufism. I believe that we are all one, and that our differences are only as deep as putting on a label. I don’t believe that I necessarily need a hijab, but if that’s how you feel most comfortable, then why should I try to decide that on your behalf?”

There is a lot of the Ottoman Empire in Western European opera – Ottomans held a place of fascination and fear for centuries – and I ask her what she thinks about the increased sensitivity around cultural representation in opera. She’s already sung a Fiorilla aria from Rossini’s Il Turco in Italia at a private concert, she tells me, and had fun with it, but hasn’t yet managed to see an entire traditional production of Mozart’s Die Entführung aus dem Serail. The rewritten Wajdi Mouawad production at the COC from a few years back she did enjoy. “The COC took a risk, decided to adopt this new angle, and good on them. I had heard the buzz about it, that there was namaz [Islamic prayer] on stage, and all those changes in the production, and I went in and was glad that someone took this approach.” The original Entführung is fiction of course, and when it comes to the life in the Pasha’s harem not exactly accurate.“In Mozart’s opera, the ladies are in control, but in real life, they would not have been,” Kalender says. Mothers would have probably have had more influence on viziers than their harem favourites. As for the stereotypical Turco character in other operas? “When you create a character, you should endow them with a variety of features – they can’t be there just for fun and ridiculing. Something to keep in mind when reviving productions.”

In Mouawad’s production, namaz is performed in Arabic. Would Ottomans have worshipped in Arabic? “Yes,” she says, and puts my pedantry to rest. “There were several languages in circulation in the Ottoman Empire, with Arabic and Farsi particularly influential. With the fall of the Ottoman Empire and the coming of Ataturk and the Turkish Republic, the official language was reformed and unified. Up to that point we were using Arabic letters; after Ataturk, we switched to Latin letters. If someone spoke to me in Ottoman today, I would not understand them.” How is the empire looked upon in today’s Turkey? Is it being fantasized about? “Yes. Certain political groups still talk about it. But I think what reignited interest in Ottomans more than anything else is this hugely popular TV show that went on for years. Magnificent Century – a quality, historically informed soap opera set in the court of Suleiman the Magnificent.” I tell her I knew about it even before Elif Batuman wrote a long piece on it in The New Yorker because the show was extremely popular in all the Slav countries in the Balkans – countries that were colonized by the Ottomans, some for several centuries. The mistrust of all things Ottoman/Turkish and the legends of heroes who fought for liberation from the empire were inbuilt in all the national poetries in the region – but this TV show, when it was on, emptied the streets. It was something akin to mania, I tell her. “It was a good show! And wasn’t Suleiman’s main woman of East European origin?”

“The lady who designed tiaras for the show designed the tiara for my wedding,” Kalender says. “My big, fat Middle Eastern wedding!
No, I don’t do things by halves.”