Messing with Winterreise is a growing and delightful industry within classical music performance. Schubert’s best-known song cycle has been fully staged and orchestrated for a chamber ensemble (Netia Jones/Hans Zender/Ian Bostridge), divided between three female singers (Toronto’s Collectìf ensemble), multi-mediatized (William Kentridge’s video projections), arranged for singer, puppet, guitar, and piano with animated drawings (Thomas Guthrie) and staged with the piano and illustrated backdrops (Ebbe Knudsen). On January 17, Toronto will have a chance to see another contribution to the conversation on the meaning of Winterreise, when Le Chimera Project, with baritone Philippe Sly, bring their klezmer- and Roma-inflected take on it to Koerner Hall. 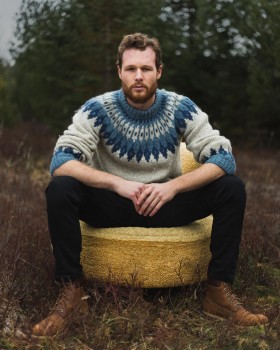 “The inspiration came when I saw a video clip of two friends, Félix de l’Étoile and Samuel Carrier, performing Gute Nacht on accordion and clarinet at a recital,” says Philippe Sly on a Skype call from San Francisco. “I thought, Oh my God, that sound suits this musical content so well. I approached Felix and asked what he thought would be the best arrangement if we were to continue with this klezmer-Gypsy-like aesthetic and he came up with the idea of having trombone, clarinet, violin and accordion instead of the piano.” De l’Étoile and Carrier wrote the draft arrangement and the entire group with Sly worked intensely on the piece for two secluded wintry weeks at the Domaine Forget in Charlevoix, where the Chimera Winterreise had its premiere.

“The interesting thing is that the arranging process became a process of reduction,” Sly recalls. We realized that there was intimacy between voice and one instrument which is at the heart of what lieder is about. You have this dynamic between two people, this dyad – we wanted to highlight that, even in the multi-instrumental setting.” The show begins with one version of Gute Nacht, and ends with another version of it – after the cycle’s final song, Der Leiermann. “The narrator asks the Leiermann (hurdy-gurdy player) if he would play his song. And we never get an answer to that. What if Gute Nacht was the song that the narrator would finally sing? What if singing a song about one’s suffering lets us transcend it? What if it’s through the artistic process that we save ourselves and that we elevate the narrative of our lives?”

Director Roy Rallo’s staging of the piece is open to different kinds of interpretation; it’s up to the audience to decide if they’d like to read this Winterreise in the traditional way, as one heartbroken man’s journey through a bleak winter landscape at the end of which perhaps he meets his end – or to experience it in a very different way. “I work in the world of opera where we have stories told in a certain way, with sets and costumes, and you’re getting singers to impersonate somebody inside of a story that’s not a story of their lives,” says Rallo, during our joint San Francisco Skype call. “Luckily, Winterreise doesn’t have a clear narrative. To me the main narrative of the evening isn’t that we’re all pretending that there’s a guy who’s had something happen to him and we’re trying to figure out what his story is. What’s going on is there are some people in the room with you, the audience members, and they’re making noise, and through the making of noise and through moving around in space, and through the framing devices that we use as part of the staging, we are creating a series of different constellations that may lead to different feelings. That is actually going on – there is no pretending.”

A more abstract, visceral and, to a degree, spontaneous Winterreise, then? All the musicians will have their music memorized, and within the preset parameters of the staging, there is freedom for individual performers to do what they choose in the moment. “We’d like to show some of the dynamics between musicians in space,” says Sly. “That’s what I find fascinating about watching musicians in general; whatever the content might be, the thing that’s really going on is making an attempt at communication. I think that going through this ordeal of performing is innately dramatic and theatrical.”

While there will always be music lovers who will find a narrative in Winterreise, this particular group of creators are more interested in its symbols, feelings, colours of language. “The performance of lieder is not storytelling in the traditional sense,” Sly says. “The idea is not to subvert the tradition, but to actually lay it bare. We’re going deeper into Schubert.” And they are treating the cycle as if it’s been recently written. “This is something we talked about a lot in the course of the making,” says Rallo. “Because we live in the world of recordings, video and audio, we can consume countless versions of Winterreise today. But the fact of the matter is, somebody wrote a song and they’d like you to sing it. I don’t think that Schubert composed with only one idea in mind regarding how it should be performed. And when we freed ourselves from the piano, a lot of the baggage that comes with performing Winterreise in recital went away. We are exploring the notes that are there. We are not changing any music – and some Winterreise versions do that.” 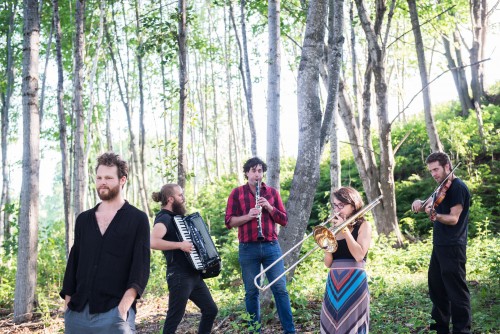 Sly and Le Chimera – which, aside from Rallo, de l’Étoile and Carrier, includes designer Doey Lüthi, Jonathan Millette on violin and Karine Gordon on trombone – have performed the piece a few times, including in Rouen and Vichy in France, and each time, Sly and Rallo tell me, they’ve effectively performed a different piece. “A lot of the times when singers work with pianists,” says Rallo, “they work out every little moment, and the performance becomes replicating this meticulous process. Whereas this performance, I think, is more about the event of it happening. Yes, certain things have been worked out in advance, but every time it happens, it happens in the way that it happens.” The change of location affects the performance: staging is slightly different each time, and whether the musicians do a particular action (as we can see in some of the clips that the group posted on YouTube) it’s to be decided in the moment. “The show always begins with the first song that Phil doesn’t sing,” says Rallo. “He basically does an action during that while they’re playing off stage. And that action, to me, informs the entire evening. And the way he does that action is never the same. It was never staged; it was only given as an idea. Never said how it should be done. And it is a kind of the seed of the evening which informs how the rest of the evening unfolds.” Adds Sly: “I’m not the only performer, let’s keep that in mind. All these people have their own agency and they’re making their decisions that will be different. We’re forced to engage in the moment.”

Which is, for Sly, what performing lieder is all about. Unlike many singers his age, the young baritone takes the art song, especially of the German kind, extremely seriously. He eagerly performs and records Lieder and continues to study the poetry. “It’s meeting Dr. Deen Larsen, the founder of the Franz Schubert Institute, that opened a whole new world for me,” he says. “There is deep satisfaction in making those works intelligible. I am in search of a state of flow when I’m performing lieder. That flow when it arrives is just fantastic. Lieder – “little gems that contain the whole universe,” as he describes them – let you say things about poetry and music that you can’t say in opera. “In opera, you are not vulnerable continuously for that amount of time. So there’s an almost masochistic quality to performing lieder that I enjoy. Just getting through it is something. As a singer, you’re part of a lineage of interpretation: I am interpreting Schubert, Schubert is interpreting the poetry – but the only way to truth is through my experience. In lieder, the mask is off.” 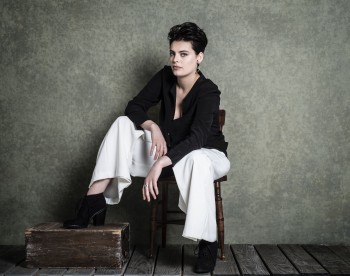 JAN 7, 12:10PM: An onstage conversation with one of the most in-demand lyric mezzos today, Emily D’Angelo. University of Toronto Faculty of Music. Voice Performance Class. Walter Hall. Free and open to all.

JAN 10, 8PM: Described as an “outrageous double bill of vocal pyrotechnics,” The Mouths That Roared concert will feature Montreal composer/performer Gabriel Dharmoo’s piece Anthropologies imaginaires and soprano Janice Jackson in a program of solo vocal compositions, many written especially for her. The Music Gallery, 918 Bathurst St.

FEB 3, 7:30PM: Danika Lorèn curates master’s and doctoral-level students from the U of T Faculty of Music in a program titled “Vocalis: A Few Figs from Thistles.” Heliconian Hall, 35 Hazelton Ave. Free and open to the public.