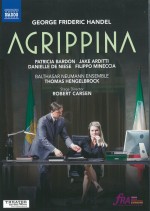 In 1709, in the early phase of Handel’s operatic career, he was approached in Venice by Cardinal Vincenzo Grimani to set Grimani’s satirical libretto based on Agrippina’s machinations to have her son Nero named emperor of Rome. Generally regarded as Handel’s first great opera – there’s a treasure trove of arias – its ribald text has been inspiring radically contemporary stagings for the past 20 years, most notably by David McVicar. Theater an der Wien’s production is a highly entertaining combination of musical purity and Robert Carsen’s provocative staging. The Balthasar Neumann Ensemble plays period instruments and three of the eight roles are sung by countertenors. Meanwhile, there’s a steely sheen to the furnishings, an iMac adorns a desk, and the fine mezzo-soprano Patricia Bardon, who has sung many of Handel’s principal females, plays the title role, stalking the halls of power in a leather skirt; at other times, the scatterbrained Nero, sung by countertenor Jake Arditti, frolics poolside with bikini-clad maidens. There’s some quickie desktop sex, a conspicuous issue of Vogue, onstage cameras and projections, staged news stories, a Mussolini-esque Claudio and, following the traditional happy ending, a gratuitous grand guignol bloodbath led by a mad Nero. Filmed in March 2016, staging that might have seemed over the top just three years ago approaches verisimilitude as our political culture increasingly resembles ancient Rome in decline.

With a 30-year leap in Handel’s career, we come to his 1739 setting of John Dryden’s Ode for Saint Cecilia’s Day, here performed by the Bach Choir of Bethlehem and issued in commemoration of the choir’s 120th anniversary and Greg Funfgeld’s 35th as its conductor. The 88-voice choir is a Pennsylvania institution along with its annual Bach Festival and Bach Festival Orchestra. It’s Handel on a relatively moderated but still grand scale, harkening back to 19th- and early 20th-century traditions. The orchestra is playing modern instruments, but there are only 27 of them, and that large choir provides depth and an impressive richness. Two fine Canadian singers appear as soloists, lending distinguished skills to the arias. Halifax-native, tenor Benjamin Butterfield, brings a brassy bravado to the drum and horn effusion of The trumpet’s loud clangor, while Edmonton-born Cassandra Lemoine’s refined soprano dovetails beautifully with Robin Kani’s flute on The soft complaining flute. Lemoine’s grace and clarity also highlight the full force of choir and orchestra in the sustained conclusion of As from the pow’r of sacred lays.