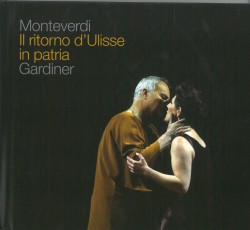 Few musicians have devoted themselves to the Baroque repertoire with the sustained passion of John Eliot Gardiner; and his relationship with Claudio Monteverdi’s music is unique. Gardiner launched the Monteverdi Choir in 1966 and the Monteverdi Orchestra in 1968, renaming it the English Baroque Soloists in 1976 with the switch to period instruments. This recording of one of Monteverdi’s three surviving operas was recorded in Wrocław during a 2017 tour celebrating the 450th anniversary of Monteverdi’s birth.

Il ritorno d’Ulisse in patria (1640), is based on the conclusion of Homer’s Odyssey, as Ulysses reaches home to find his wife Penelope and his lands besieged by suitors. It was composed more than 30 years after Orfeo, when the 73-year-old composer was convinced to write again for the stage at the end of a career devoted largely to composing for the church.

This is a masterful realization of the work, with Gardiner, his choir and orchestra attuned to its pageantry, drama and sheer beauty, as well as Monteverdi’s sudden shifts through a broad emotional range. In the first act, the orchestra caresses and supports the sorrowful Penelope; the second concludes with rising battle music; and in the third the choirs of Heaven and Sea are graced with the elemental clarity and grace of Monteverdi’s madrigals. Il ritorno is a key document in opera’s early history, with an increasing shift from intoned text to dramatic song: Gardiner and company’s performance is both vigorous and authentic.