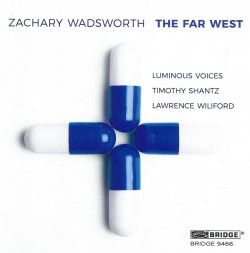 The Far West opens with music evocative of Macmillan and Brickenden’s Celtic Mass for the Sea; in fact, not since that album have I heard a choral work that captures its subject with such well-curated and gut-punching text. This Choral Canada winner is an homage to victims of AIDS, and it’s both achingly beautiful and horrifyingly vivid in its imagery as it paints portraits of Tim Dlugos, its posthumous librettist, and stricken friends.

Dlugos’ divinity training interweaves references from Bergman to AZT, so textual allusions to liturgical music and the Divine Office still match the different musical styles, such as the funereally resolved first movement, October, the expansive choral chords of Note to Michael, and the baroque-ish Heaven, latterly with lyrics from the Renaissance by George Herbert. Several times, the work evokes English staples, such as Parry’s I Was Glad or Fenton’s Veni Sancte Spiritus, and made me want to run back to my days of church choir with Tom Fitches.

Themes of reconciliation, despair and resignation are conveyed alongside word play with homophones and synecdoche. The first two tracks, settings of poetry by Paul Laurence Dunbar and Christina Rossetti, are complementary introductions to the cantata. If this review is more about the texts than the music, it’s because the poetry absolutely slays the listener but, while the words are the stars in this piece, Zachary Wadsworth has composed a votive in The Far West, and Lawrence Wiliford and Luminous Voices shimmer throughout. 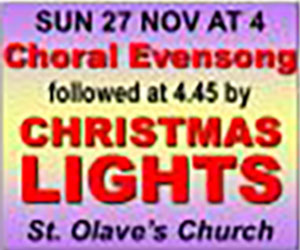