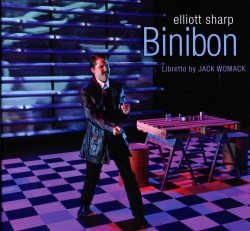 Theatrically gripping and sonically sophisticated, this modern opera by composer Elliott Sharp and librettist/narrator Jack Womack reflects the events surrounding a 1981 killing in New York’s East Village. That flashpoint was the genesis for a musical meditation on Manhattan, where “everyone has a favorite murder.”

Through studio wizardry Sharp creates all the instrumental sounds on reeds, guitars, bass, percussion, synthesizer and programmed samples. With the score providing leitmotifs for the story, Sharp’s instincts are note-perfect, whether backing the narrator’s hard-boiled sardonic drawl with overblown saxophone vibrato à la Harlem Nocturne or using menacing guitar flanges to underline Jedediah Schultz’s dialogue as protagonist Jack Henry Abbott boasting how he can gut a victim while knifing him. Later echoing industrial sound accelerates to synthesizer and drum-beat disco-funk, when waitress Susie (sung by Queen Esther) defiantly describes her street smarts, then in funky R&B mode, vocalizes her view of the tragedy.

A 24-hour Bohemian hang-out, the Binibon restaurant was where manager/actor Richie Aden (sung by Cy Fore) was murdered by Abbott, a writer and psychopathic criminal. While the libretto makes clear that the brutal murder presaged the city’s gentrifying, to become “Ground Zero Disneyland” as Womack states deadpan while samples of ecclesiastical organ music pump in the background, Sharp’s music evocatively recreates the 1980s sound milieu.

Whether it’s the jerky pulsating electronics that backs Ryan Quinn’s campy rap as drag queen and eyewitness Fabuluscious or the hard-C&W styled guitar twangs that frame the showdown and eventual murder – escalating to motor-driven grinds and scrapes during the act itself – the music is appropriately illustrative. Binibon is a momentous achievement, because Sharp and Womack have not only recreated a particular time and place, but also recast it in the form of top-flight musical drama.