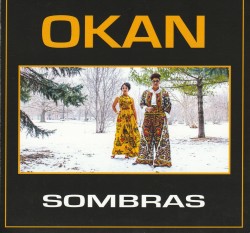 The two creators of OKAN are Elizabeth Rodriguez on vocals and violin and Magdelys Savigne on vocals, congas, cajon, bata drums and small percussion. Both artists are also the primary composers of the material on their exquisite new recording, Sombras, which translates as “shades”… and that’s exactly what this talented duo has given us – hues, intensities and variegations. Sombras was produced by uber-talented bassist Roberto Riveron (who also performs on the CD). The inspired lineup of players also includes Anthony Szczachor and Frank Martinez on drums; Bill King, Danae Olano, Jeremy Ledbetter and Miguel de Armas on piano and keyboards; Reimundo Sosa on quinto guitar; Pablosky Rosales on tres guitar; Alexis Baro on trumpet and Mari Palhares on pandeiro and surdo.

The title track opens with the intoning of a sacred blessing – perhaps for Mother Africa herself, by way of Cuba – followed by a pulse-racing Latin explosion featuring sumptuous, dynamic vocals, a stirring and volatile piano solo from de Armas and the entire face-melting ensemble. Certainly one of the most moving tracks on the project, Laberinto seamlessly segues from a folk-song-like interlude into a very contemporary number, steeped in pure, powerful Cubanismo.

Other delights include Desnudando El Alma (Stripping the Soul), which is a heartrending and muy romantico ballad, made all the more melancholic by the moving string arrangements and the always gorgeous piano work of King, as well as a technically thrilling bass solo from Riveron. With the charming closer, Luz (Light), we are again transported to a magical place of ancient sights, smells and emotions – Cuba puro – OKAN si!