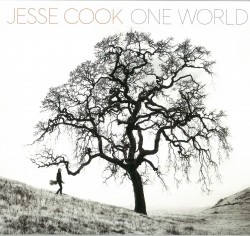 Virtuosic, globally inspired guitarist/composer/producer Jesse Cook is known for his stellar, cross-cultural musical motifs and collaborations. His previous JUNO-nominated recording projects have sampled the sonic landscapes of such far-flung locations as Cairo, Colombia and Lafayette, Georgia. On his ninth CD, One World, the usually peripatetic, Paris-born and Toronto-raised Cook has chosen to stay in his own back yard, while still incorporating into his compositions a tasty ethno-smorgasbord, which includes sitars and violins, as well as powerful techno bass sequences and other well-placed and masterfully engineered technology.

Cook’s considerable skill as a highly trained classical, flamenco and jazz guitarist is evident throughout this fine, well-produced recording and on each composition he metaphorically crosses the Bosporus – weaving Eastern and Western musicality and instrumentation into a joyous celebration of alpha wave stimulation and artistic globalism. In describing his project, Cook has said, “The idea is that there really is just one world. If you pull your focus back far enough, you start to see all music as being branches of the same tree….”

Standouts include Shake – a pulsing and virile flamenco, infused with raga-like rhythmic patterns and dynamic percussion; the wild and trippy sub-continent techno journey of Bombay Slam and Taxi Brazil, which conjures up cinematic images of a heady cab ride through Rio. Also of note is the mystical and sensuous Steampunk Rickshaw and the Iberian-infused Beneath Your Skin. The closing track, Breath, features Cook’s pure, warm, crystalline solo acoustic guitar, leaving the listener refreshed and restored – the perfect end to this multi-sensory journey through vibrant and delightful musical exotica.