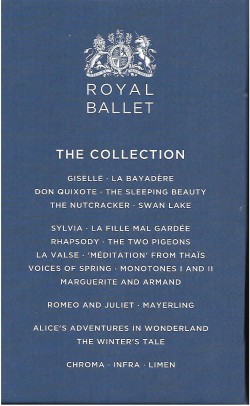 At a time when we are not able to go out and see live ballet and indeed ballet companies are shuttered, I was fortunate enough to be asked to review The Royal Ballet Collection (Opus Arte opusarte.com/details/OABD7210BD). This is truly an incomparable collection of both best-loved and several sensational new productions.

I shared this experience with my granddaughters and if not quite like going to the ballet, it is in some ways better. While there is nothing quite like actually being at a live performance, the brilliant camera direction adds an element that is simply not available at the live event. The director chooses where to focus our attention at any given moment and this undoubtedly increases our appreciation ten-fold. The Royal Ballet has engaged experienced directors for each and every one of these productions.

Simply called The Collection this is a compilation of 22 ballets on 15 Blu-ray discs. Many of the ballets include select scenes and bonus features after the ballet is over.

Included is a beautiful book of notes and full plot synopses as well as pictures from each of the ballets. Whether you are a fan of the ballet, new to it, or interested in a brand-new experience, this box is the answer.

As a music reviewer, the most important component for me is the musical performance. I listened with and without the video and found the Orchestra of the Royal Opera House’s contribution to be at all times engaging, animated, musical and frankly breathtaking in parts. Ballet is an example of one of the most perfect combinations of the visual and the audible. The Royal Ballet’s new box set is just that, the perfect combination. In truth, in many cases, the marriage of the visuals and the power of the orchestra are literally overwhelming

Chroma, music by Joby Talbot and Jack White III, Infra, music by Max Richter and Limen, music by Kaija Saariaho, all choreographed by Wayne McGregor, are completely new to me and a real revelation. These are minimalist works, both visually and musically.

Choreographer Sir Frederick Ashton’s ballets, nine in all, are well represented with Sylvia, The Two Pigeons, La Valse and Monotones I and II among others, composed by Leo Delibes, André Messager, Maurice Ravel and Erik Satie. I have to admit that my favourite is Marguerite and Armand, with music by Franz Liszt. I’m not sure if it’s because of the orchestral setting of Liszt’s Sonata in B Minor or Ashton’s beautifully romantic visualization, but I suspect it is the perfect combination of the two.

Often considered Kenneth MacMillan’s finest work, Mayerling is included, along with his incomparable Prokofiev Romeo and Juliet. Liszt’s Faust Symphony was chosen for the dark and compelling Mayerling, and with Barry Wordsworth on the podium it is a must see and hear!

The experience of reviewing these discs afforded the opportunity to view and listen to performances I would otherwise never have had. 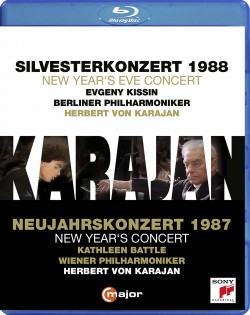 Karajan (C-major Entertainment, naxosdirect.com/search/759704), is an unexpected but most welcome new Blu-ray video of two live concerts conducted by Herbert von Karajan, with soloists, from concerts in Berlin and Vienna.

From the Philharmonie in Berlin we witness The 1988 New Year’s Eve Concert with the Berlin Philharmonic Orchestra and pianist Evgeny Kissin playing the Tchaikovsky Piano Concerto No.1 in B-flat Major. The opening work from this concert is Prokofiev’s Symphony Op.25, aka The Classical Symphony.  Prokofiev wrote this work in the style of music written in the time of Haydn and Mozart. It is in four movements which sound, under Karajan’s baton, as exactly that, except for the timbre of the modern instruments. Nevertheless, it is Prokofiev. In the Tchaikovsky we see and hear a 17-year-old wunderkind play. When the LP of this performance was originally issued by Deutsche Grammophon, the critics and the classical audience were mixed in their reviews. One of the features of this performance is the second movement, Andantino semplice – Prestissimo which critics felt Kissin played too slowly. After all, this is a romantic concerto and Kissin felt that playing more slowly was more suitable. (Karajan also recorded this concerto with Weissenberg and Richter with the usual tempo.) One has to wonder whether Karajan was indulging the young pianist or did he feel this slower tempo served the composer well?  There is no doubt when you watch the performance that they are definitely of one mind.

The New Year’s Day concert of 1987, with the Vienna Philharmonic conducted by Karajan, featured the music of the two Johann Strausses, father and son, and Josef Strauss. The concert of 15 pieces, including waltzes, polkas and overtures, was broadcast as usual from Vienna and was heard and seen around the world. The concert opened with the rousing Gypsy Baron Overture and ended as usual, with the Beautiful Blue Danube followed by the Radetzky March involving the audience clapping to the tempo at Karajan’s direction. After the opening bars of the Beloved Anna Polka the broadcast audience is treated to a special performance from the Spanish Riding School of Vienna. Also featured especially for the broadcast audience is the Ballet of the Vienna State Opera dancing to the majestic Emperor Waltz in the Schönbrunn Palace. Kathleen Battle in her prime sings the Voice of Spring.

Little did we know at this joyous time, that Karajan was to pass away at his home in Anef a brief seven months later. We are so lucky to have this recording of Karajan at his best. We experience him as a happy and enthusiastic conductor showing his abiding love and affection for the music and the orchestra.

The Royal Ballet Collection and Karajan are both available on Blu-ray Disc only.