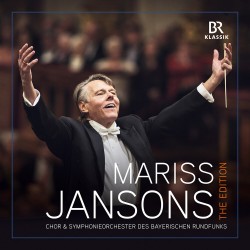 Opening the newly released Mariss Jansons – The Edition (Chor & Symphonieorchester des Bayerischen Rundfunks BR Klassik BRK900200 naxosdirect.com/search/brk900200) was like opening a jewel box of wonderful gems. I thoroughly enjoyed discovering all of them, both performances of repertoire with which I was already familiar and newly discovered works. As we have come to expect from this source, the sound quality is astonishingly good. Audiophiles will be especially pleased.

Mariss Jansons was born in Riga, Latvia on December 1, 1943 during the time of the Nazi occupation. His mother, Iraida was Jewish and had been spirited out of the Riga Ghetto for the delivery of her son. As the Nazis had murdered both her brother and her father, leaving the ghetto was a necessary precaution.

Jansons’ first violin teacher was his father, Arvids, who played in the Riga opera and was also assistant at the Leningrad Philharmonic Orchestra to Evgeny Mravinsky and Kurt Sanderling. Jansons also studied piano and conducting at the Leningrad Conservatory, and later in Austria with Hans Swarovski. He studied with Karajan in Salzburg in 1969 and two years later won second prize in the Karajan Conducting Competition. Karajan later invited the young Jansons to become his assistant in Berlin but the invitation was intercepted by Soviet authorities. Jansons did not become aware of that missed opportunity until many years later.

In 1979, Jansons became music director of the Oslo Philharmonic where he remained until 2000, despite a near fatal heart attack in 1996 while conducting La Bohème. The orchestra and conductor finally parted company over his long-running dissatisfaction with the poor acoustics of the Oslo Concert Hall. He was principal guest conductor with the London Philharmonic Orchestra in 1992. He was appointed director of the Pittsburgh Symphony Orchestra in 1997 with a three-year contract to be renewed yearly, but instead in 2002, he gave two years notice. He followed Ricardo Chailly as music director of the Concertgebouw Orchestra of Amsterdam in 2004. Jansons inherited a flawless orchestra, admired around the musical world from the reign of Willem Mengelberg (1895 to 1945) and continuing through those who followed. Jansons’ refinement of their sound was subtle but noticeable to the extent that Gramophone magazine’s international panel of music critics declared that this orchestra was now “The World’s Greatest.”

Jansons had also been associated with the Bavarian Radio Symphony Orchestra (Bayerischen Rundfunks) in Munich, founded by Eugen Jochum in 1949, now one of the very best orchestras anywhere. When he decided to cut back his conducting commitments due to age and ill health, he was forced to choose between the Concertgebouw and the BRSO. Surprising some observers, he chose the Bavarians. In retrospect, and based on this new 70-disc set, his years in Munich amounted to his Golden Age as one magnificent performance followed another.

The box contains 57 CDs, 11 SACDs and two DVDs. That’s a lot of music that would take more than two 40-hour weeks to hear and see just once. As to be expected in collections such as this, there are acclaimed performances of all the symphonies of Beethoven and Brahms, Bruckner’s numbers three to nine and Mahler’s one through nine. The performances chosen are as fresh as paint and the result is often to take pause and play it again.

As an example, Beethoven’s Third Symphony is no stranger to these ears and hearing it is not the experience it once was. However, hearing the Eroica from this set was an unfamiliar experience akin to synesthesia. I was drawn in and somehow was among, but not one of, the players. Upon replay there was still the persuasive illusion of being there.

Tchaikovsky has six works in the big Jansons box: Symphonies Four, Five and Six; Francesca da Rimini, Overture to Romeo and Juliet and a complete performance of his opera, Pique Dame. Not related to Pyotr Ilyich is Alexander Tchaikovsky, a Russian composer born in 1946 whose Symphony No.4, Op.78 for tenor, choir and orchestra provides a workout for everyone, particularly the percussion. This could be a new modern favourite.

Another perfect example of new life in old favorites is Saint-Saëns’ Symphony No.3, the “Organ Symphony.” From the exquisitely hushed opening to the grandeur that follows, one’s attention never wanders. Throughout the rest of the recording the organ does not dominate but is omnipresent. In the last movement, where the organ can often swamp the other instruments, there is beautiful restraint and space to appreciate the rest of Saint-Saëns’ famous score. The organist is Iveta Apkalna who is also the soloist in the impressive Poulenc Concerto for Organ, String Orchestra and Timpani. Another welcome work by Poulenc is his Stabat Mater for soprano, mixed chorus and orchestra along with Arvo Pärt’s Berliner Messe for chorus and string orchestra and Stravinsky’s Symphony of Psalms. The Stabat Mater by Dvořák is also included.

The Symphonie fantastique would seem to be a natural for Jansons. We are gifted with excerpts of rehearsals for the enormously powerful performance of the complete work to be found elsewhere in this collection. Jansons addresses the orchestra in German only but there is no mistaking what he is telling the players, and exactly what he wants to hear from them. On the second of the three rehearsal discs we hear the Tchaikovsky Fifth Symphony and on the third, Jansons at work on Till Eulenspiegel. I believe that listening to these rehearsals before the complete performances may well enhance the pleasure in hearing how the passages undertaken fit into the whole.

Of course, in a collection of works by 42 composers there are more treasures that require an honorable mention, including a video of an in-concert Gurrelieder with my favourite Wood Dove, Mihoko Fujimura, who is also heard in other works in this set. Other astonishing performances include the Verdi Requiem, Rite of Spring, Petrouchka, Firebird Suite, Rhapsody in Blue and a powerful Pictures at an Exhibition.

This unique collection includes a 72-page LP-size fine-art booklet containing details on every recording and tributes from Jansons’ colleagues. It’s a really beautiful addition to this very impressive package. In all, this is a thoughtfully curated selection that highlights the great conducting performances with the Bavarian Radio Symphony Orchestra and Chorus spanning Jansons’ distinguished career with them between 2003 and 2019, the year of his death (br-so.com/cd-dvd/mariss-jansons-the-edition). 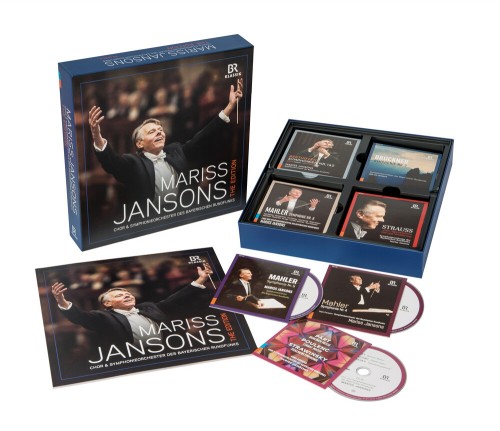