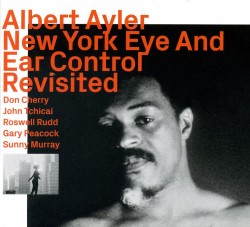 Part of the disc’s longstanding appeal is the unfiltered reed extensions from Ayler, who emerges as first among equals in the group, even though it’s one of the saxophonist’s few non-leadership sessions.

Although free jazz at its freest, the tracks’ sounds aren’t formless, with the nephritic honks of Ayler’s saxophone serving as thematic leitmotif throughout. Other than that, the sound narrative is expressed by contrasting guttural snarls and low-pitched bites from Ayler, sometimes seconded by Tchicai’s snaky split tones, while Cherry’s shrill rips and flutters propel melodic and linear interludes. Rudd’s smeary triplets are heard sparingly, most conspicuously on A Y in an up-and-down duet with Peacock, whose systematic rhythmic thumps likewise stay in the background. Not Murray, whose drum rolls and ruffs frequently punctuate the ongoing group narratives. Balanced experimentation like the film, the session confirms its structure when Ayler ends it by recapping the subterranean growl which begins the program.