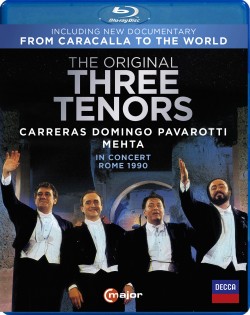 It seems so long ago that the world was introduced to The Three Tenors. It has been 30 years since the concert starring three great tenors of the day made entertainment history. The original concept was to have a concert of popular opera arias sung by a lone artist. How the simple idea developed into The Three Tenors – José Carreras, Plácido Domingo and Luciano Pavarotti – singing before a capacity audience in the site of the old Roman baths of Caracalla is told here in a brilliant, informative bonus feature, supplementing the original concert footage. The documentary, From Caracalla to the World, lets us into the evolution of the three-man show – actually four men including conductor Zubin Mehta. After that first performance, as seen on this disc, their impresario offered the show to record companies who declined, arguing that the “songs” were too old and the public would not be interested. Only Decca saw the future and immediately signed them. The documentary is 88 minutes in duration including contemporary videos of the principals and other familiar faces and names as they were 30 years ago; also, the plans for and scenes from the subsequent 1994 concert in Los Angeles that was the most watched musical event in history. More than one and a half billion viewers watched the concert via 100 national television networks. It’s all there and more in the revealing documentary.

In the concert itself there are 15 arias plus an extended 20-minute medley. The arias and songs are familiar or soon will be. Rather than pick and choose I listened and watched right through as each singer came and sang his heart out whether it be an aria or a song or a familiar piece and then left the stage to await his next turn. Not once was there the slightest inclination to skip ahead. Track 14 is an entertaining medley of a variety of material, romantic, sentimental, recognizable songs like Amapola, O Sole Mio and from Broadway like Maria, Memory, Tonight, La vie en rose. Each tenor and Mehta is clearly having a contagiously good time shared by those in the audience. The Original Three Tenors in Concert, Rome 1990 plus a new documentary (C major 758804 Blu-ray video naxosdirect.com/search/758804). 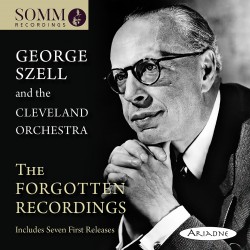 SOMM has issued a collection of eight recordings made by George Szell and the Cleveland Orchestra. Only one of these performances has been issued previously, by Columbia, on CD. In 1946 Szell became only the fourth music director of the orchestra since its founding in 1918. He took the appointment promising to transform the orchestra, as excellent as it was, into one of the finest in the land. He succeeded. On the second disc of the two-CD set there are stirring performances of four favourites from his repertoire: Brahms’ Academic Festival Overture and Variations on a Theme by Haydn (previously released); Schumann’ Symphony No. 4 in D Minor; then Stravinsky’s 1919 suite from The Firebird. These stereo recordings were made in the Masonic Auditorium in Cleveland in October, 1955 and sound as fresh and real as yesterday – flawless and excitingly present.

The first starts off with Bach’s Orchestral Suite No.3, then Smetana’s The Moldau and from Strauss, Till Eulenspiegel’s Merry Pranks all from Christmas Eve, 1954. These are monaural recordings that are sonically a few notches down from the second disc, but still exemplary music making from the podium. The fourth work is from the same stereo sessions as all the items on the second disc, an exuberant Mozart Symphony No.39 K543.

The stereo recordings in this set are sonically exemplary thanks to the producer and restorer Lani Spahr, himself an oboist whose restorations are to be heard on many labels. George Szell – The Forgotten Recordings (Ariadne 5011-2 2CDs naxosdirect.com/search/ariadne+5011-2) 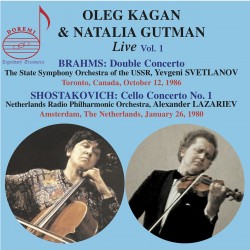 On the evening of October 12, 1986 the audience in Toronto’s Roy Thomson Hall heard the State Symphony Orchestra of USSR conducted by Yevgeni Svetlanov. The highlight of that concert was surely the Brahms Double Concerto for Violin, Cello and Orchestra, played by the husband and wife duo of Oleg Kagan, violin and Natalia Gutman, cello. The Double Concerto is a particular favourite, so I am familiar with many of the recordings and after enjoying this new release of that very concert performance it is quite clear, at least to me, that this is one of the most sensitive, where appropriate, and one of the boldest. Kagan and Gutman, two of the finest Russian musicians of all time, were wisely selected for the orchestra’s international world tour. The interplay between them often has an elegance not to be heard elsewhere. Svetlanov’s crack touring orchestra supports them perfectly and ever so gently where called for.

Kagan was a most highly rated and respected violinist and chamber music musician and was often heard with Sviatoslav Richter and other virtuosi. He died in Munich in 1990. Gutman plays on and is one of the world’s most esteemed musicians, often referred to as “The Queen of the Cello.” She is also to be heard in the other work on this CD. It is the Shostakovich Cello Concerto No.1 in E-flat Major Op.107 played by Gutman with the Netherlands Radio Philharmonic Orchestra conducted by Alexander Lazariev. The performance is from January 26, 1980 in Amsterdam, predating the above by six years. Gutman made an amazing reputation for her performances of this concerto which she also recorded a few times. This live performance demonstrates her authority and electrifying musicality. Legendary Treasures: Oleg Kagan & Natalia Gutman Live, Vol.1 (Doremi DHR-8120 naxosdirect.com/search/dhr-8120). 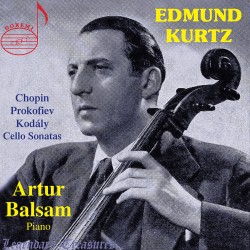 Edmund Kurtz was one of the most accomplished cellists of the 20th century. He was born in St. Petersburg in 1908. The family moved to Germany in 1917. He debuted in Rome in 1924 and Berlin in 1925. After solo concerts throughout Europe he became principal cellist in the Bremen Opera House then principal cellist in the Prague German Opera Orchestra under George Szell. Kurtz emigrated to the United States and became first cello in the Chicago Symphony. He was also part of the Spivakovsky Trio with brothers Tossy and Jascha. He resigned from the orchestra in 1944 to pursue a solo career. In 1945 Toscanini chose Kurtz for the Dvořák Cello Concerto. He made recordings with William Kapell and Artur Balsam and others and gave many premieres including the first American performance of the Khachaturian concerto under Koussevitzky. Kurtz’s playing was notable for a creamy, lush sound, focused and authoritative. The very first notes out of your speakers will confirm all the above and continue to do so through these three cello sonatas: Prokofiev’s C Major Op.119 and Chopin’s G Minor, Op.65, are both accompanied by Artur Balsam; then the infamously difficult Kodály Sonata for Solo Cello, Op.8 that Kurtz makes sound engaging and effortless. Legendary Treasures: Edmund Kurtz, Volume 1 (Doremi DHR-8109 naxosdirect.com/search/dhr-8109).