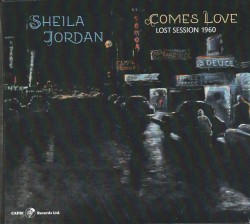 At age 92, iconic jazz vocalist, composer and NEA Jazz Master, Sheila Jordan has just released a lost treasure – capturing the young artist prior to her notable 1963 Blue Note Records debut, Portrait of Sheila. Originally recorded on June 10, 1960 in NYC, this gem has been insightfully produced for a contemporary jazz audience by Thomas Burns. Sadly, Jordan has no clear recollection of the record date itself, or the personnel, but it’s likely that it includes members of her then-trio of John Knapp or Herbie Nichols on piano, Ziggy Willman on drums and bassists Gene Perlman or Steve Swallow (with whom she later developed her trademark vocal bop and bass duo).

Throughout the recording, Jordan’s warm, engaging voice resonates with youth, but is also imbued with a certain melancholy worldliness, as well as the superb vocal technique for which she would become known. On Ellington’s It Don’t Mean a Thing if It Ain’t Got that Swing, Jordan bops and bobs and weaves her way through the gauntlet with tight, supple accompaniment from her trio. The inclusion of Wolf and Landesman’s Ballad of the Sad Young Men is an eccentric choice for this collection, but Jordan more than compensates for her possible naïveté, with her incredible empathy, heart and soul.

Another treat on this fine project includes a laudable vocal jazz version of Harold Arlen and Truman Capote’s Sleeping Bee – performed here with the original verse, segueing into a lilting, swinging arrangement.  Jordan’s interpretation of Rogers and Hart’s Glad to be Unhappy is also a triumph, as well as a masterclass in how to perform a ballad with integrity and creativity, while fully utilizing the colours and timbre of the vocal instrument as well as collaborating (sans ego) with the other musicians. Magnificent!