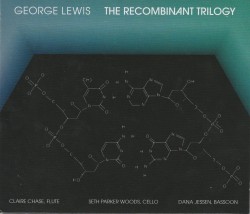 Few musicians have explored the relations between instrumental music and computer programming with the creative zeal of George Lewis, from Rainbow Family, the recently released IRCAM works from 1984 (Carrier Records), to his various interactive works with his Voyager program. His Recombinant Trilogy shifts from works employing improvisation to compositions that apply “interactive digital delays, spatialization and timbre transformation to transform the acoustic sounds of the instrument into multiple digitally created sonic personalities.”

Each of the three pieces combines a soloist with computerized electronics, in the process creating a kind of malleable ensemble that achieves often startling effects within seemingly acoustic timbres, including parallel microtonal lines. Materials are reworked out of sequence, liberating time and continuity in the process. The opening Emergent (2014), performed by Claire Chase, flute, and Levy Lorenzo, electronics, is the sunniest of the three, exploiting and expanding the flute’s mimetic powers to summon up flocks of birds that sing, soar and swoop. Not Alone (2014-15), with cellist Seth Parker Woods operating electronics as well, pushes the cello well beyond its typical sonic contour, pressing far into violin, contrabass and vocal arenas. For sheer evocative power, Seismologic (2017), performed by Dana Jessen on bassoon and Eli Stine on electronics, stands out, magnifying both the bassoon’s range and Jessen’s extended techniques to create an underground labyrinth of menacing roars, Doppler-effect turns and sudden haunted choirs.

Listen to 'George Lewis: The Recombinant Trilogy' Now in the Listening Room