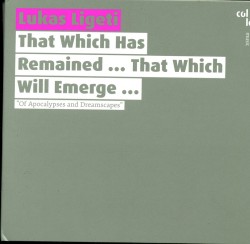 That Which Has Remained …That which Will Emerge
Lukas Ligeti
Col Legno WWE 1CD-20452 (col-legno.com)

Juxtaposing folk songs with instruments means that the often melancholy, sometimes freylekhs melodies, suggest responses that range from stropping string thrusts and barbed reed flutters to sequences which expand on klezmer and pre-War cabaret tunes. Majewska’s bel canto lyricism is most effective in unadorned recitations or personalizing familiar tunes. Modernism isn’t pushed aside for nostalgia though, as sections find her ululating vocals framed by clanking percussion vibrations. The keenest musical commentary is by inference on the connected City of the Damned and Elusive Counterpoint. With thick drum beats and pressurized string stops alongside the snatch of a Yiddish song, Warsaw’s pre-Holocaust Jewish ghetto and its destruction are suggested by City of the Damned. Harsh spiccato sweeps from the strings are notable in Elusive Counterpoint. The sorrowful exposition gradually fades to ghostly echoes as the Yiddish tune becomes fainter subtly questioning what contemporary life holds for Jews in Poland.

Lacking the interactive element possible in the museum’s spatial atmosphere, the disc is still a superlative listening experience.