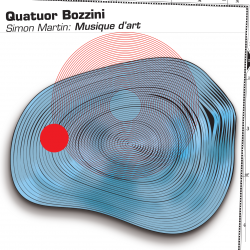 Simon Martin is a younger Quebecois composer whose work is intimately connected with music’s relationship to materiality. His earlier work Hommage à Leduc, Borduas et Riopelle focused on specific works of three great painters, setting each segment with a small group of like instruments: a saxophone quartet, a trio of classical guitars and the string quartet, Quatuor Bozzini. Here the quartet turns to a more ambitious Martin work. Musique d’art is similarly concerned with meaning, with relationships among music, sound and noise and the philosophical and material status of the musical work, its title a play on the expression “objet d’art.”

It’s a work of substantial scale, over an hour in length, and also great sonic mass. Quatuor Bozzini is extended to a string quintet here with the presence of double bassist Pierre-Alexandre Maranda. In some of the work’s five movements, his is the central voice. The first part moves from silence to a consonant drone that’s gradually engulfed in a gathering dissonance only to return to silence. Maranda’s role comes to the fore in the second part, his harsh, low-register bowing suggesting grinding tools. At another point, his savage, whipping glissandi feel as much like a side effect of industry as a musical technique.

The final movement alternates groups of sustained harmonics to develop a state that’s simultaneously tense and suspended, gradually creating a sense of timelessness. A kind of stable mystery, Musique d’art can only grow in significance.