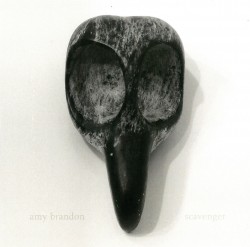 The first sounds to greet the listener on Amy Brandon’s debut CD are electronic swirls and squiggles, likely guitar-based and clearly running backwards. Within seconds, however, one is in for a surprise, as the very pure sound of her acoustic, nylon-string guitar emerges. Brandon is a Nova Scotia-based musician whose work here regularly combines contrasting elements: her musical identity is a composite, arising in the gap between the electroacoustic elements and acoustic melodies and improvisations.

On Scavenger, most tracks include these pre-recorded sounds, some of them clearly reworked from her own guitar tapes, others likely using other elements, whether the sound source of the War Games backing tape is thunder, actual combat, a reverb unit or the resonant bass strings of a piano. The results are fascinating, in part because of Brandon’s instrumental approach: it’s a model of classical guitar clarity in the tradition of Segovia, Yepes and Bream, with lyricism and triadic harmony that can suggest idiomatic composers like Villa-Lobos and Rodrigo.

Along the way, Brandon invites others into her musical world. VL is a duet with the distinguished Montreal jazz guitarist Mike Rud, his glassy sound contrasting with Brandon’s warmth between otherwise similar approaches; in contrast, her duet with Ottawa-based acoustic guitarist Roddy Ellias on Ecoando is a clear mirroring of sound. This is a fascinating debut, and one looks forward to Brandon’s further explorations.