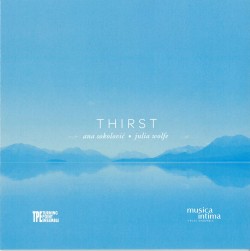 Thirst. The name of this CD evokes a primal human need and fear – our absolute reliance on water for survival. The album offers four works by two composers – Ana Sokolović from Montreal and Julia Wolfe from New York City – whose composing styles share some similarities while also exhibiting quite contrasting approaches. The four works on the album are expertly performed by two Vancouver-based groups, the Turning Point Ensemble and musica intima.

Beginning with three works by Sokolović, one immediately is struck by her compelling and driving use of rhythm. This feature can in part be attributed to her Serbian background and the influence of traditional Balkan music with its characteristic irregular rhythms. The first track is inspired by songs from a Serbian rock band, whereas the third track Vez, a Serbian word for embroidery, creates an atmosphere of furious and energetic patterns and gestures for solo cello. Her other work Dring, dring plays with both sounds and words associated with the experience of using a telephone. Humourous and dramatic exchanges are tossed amongst the singers in four different languages.

Wolfe’s epic work Thirst immediately casts a spell upon the listener with its long expansive and timeless gestures, all the while maintaining a driving movement forward. Using text from the Old Testament prophet Isaiah, the composer creates an intense drama, plunging the listener into an act of contemplating the precious need for and precarious presence of water.