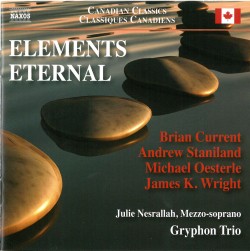 The CD opens with Brian Current’s These Begin to Catch Fire (2012), which suggests patterns of light reflecting on the water at Lake Muskoka. The intensity of this mesmerizing composition is heightened through a series of complex polyrhythms in the piano part, played flawlessly by Parker.

Andrew Staniland’s Solstice Songs (2011) highlights the importance of the celestial seasons in this compelling instrumental work written in three sections. The ensemble effectively communicates the wide scope of moods that range from an ethereal nocturnal atmosphere to an exciting perpetual motion finale.

Centennials (2012) by Michael Oesterle celebrates the centenary of the birth of three individuals born in 1912: chef Julia Child, composer Conlon Nancarrow and painter Jackson Pollock. Their contrasting personalities are captured perfectly and the Trio’s skills are particularly evident in the final movement with its extreme fluctuations of temperament that the production team has recorded with balance and clarity. An excellent CD.