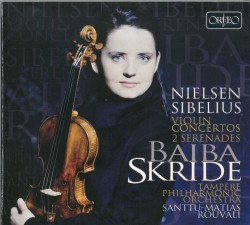 The following is an excerpt from Strings Attached (December 2015) which can be read in its entirety here.

The Sibelius & Nielsen Violin Concertos make an excellent and natural pairing on the new 2-CD set from Latvian violinist Baiba Skride, with Finland’s Tampere Philharmonic Orchestra under Santtu-Matias Rouvali (Orfeo C 896 152 A). Both composers were born in 1865; both were violinists; both became the leader of their respective country’s Nationalist musical movement; and the concertos were written within a few years of each other in the first decade of the 20th century.

Skride is terrific in the Sibelius, with her rather fast and somewhat narrow vibrato providing a steely edge to the lush tone and phrasing and giving the work a real Nordic feel. The Two Serenades for Violin and Orchestra Op.69 complete the first disc; written in 1912-13, they are not heard all that often, and are a welcome addition here.

The Nielsen concerto is a lovely work that should really be more widely known; indeed, Nielsen’s music in general has never quite gained the recognition outside of his native Denmark that it deserves. In this case it may be the length and shape of the work that’s to blame: it’s almost 40 minutes long, and although ostensibly in four movements is actually in two sections, with the brief first and third “movements” – the latter the only slow movement – acting more as introductions for each half. Also, the simply glorious theme that appears after the brief flourish at the beginning of the work never reappears, and nothing else quite matches it. The performance here is outstanding, though.