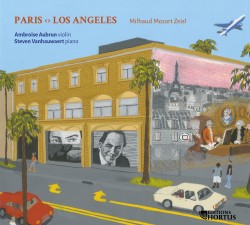 In 1938 the Austrian composer Eric Zeisl (1905-59) fled Vienna for Paris, where he was befriended by Darius Milhaud. Milhaud helped Zeisl’s family move to Paris and subsequently to Los Angeles in 1939, Milhaud himself following to Oakland, California in 1940. The two remained close friends.

The French violinist Ambroise Aubrun discovered Zeisl’s music during his doctoral research at the University of California in Los Angeles, and his new album Paris <> Los Angeles with pianist Steven Vanhauwaert depicts the composers’ friendship as well as revisiting a Mozart sonata that apparently fascinated Zeisl (Editions Hortus 189 ambroiseaubrun.com).

Two short pieces by Zeisl open and close the disc: Menuchim’s Song (1939) from the incomplete opera Job and the world-premiere recording of the lyrical Zigeunerweise, the first movement from the unpublished 1919 Suite for Violin and Piano Op.2 that Aubrun discovered in the Zeisl Collection at the university. The other Zeisl work is his substantial three-movement Brandeis Sonata from 1949, named for the California Institute where Zeisl was composer-in-residence.

Milhaud is represented by his four-movement Violin Sonata No.2 from 1917, a quite lovely work. The Mozart is the Violin Sonata No.21 in E Minor K304. Written in 1778 during the Paris visit that saw the death of his mother, it is his only minor key violin sonata as well as his only instrumental work in that key.

There’s excellent playing throughout a terrific CD, with the Mozart in particular a beautifully judged reading – clean and nuanced, with a finely balanced emotional sensitivity.