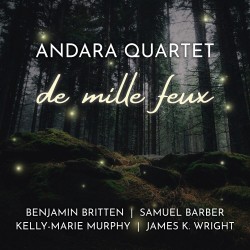 Kelly-Marie Murphy reappears on the next disc, de mille feux (a million lights) featuring the Andara Quartet (leaf music LM262 leaf-music.ca). Murphy’s Dark Energy was commissioned by the Banff Centre and the CBC as the required work in the 2007 Banff International String Quartet Competition, won that year by Australia’s Tinalley String Quartet although the prize for best performance of the Canadian commission was awarded to the Koryo String Quartet (USA). The Andara Quartet would not be formed until seven years later when the members met at the Conservatoire de musique de Montréal. They have subsequently gone on to residencies at the Banff Centre, the Ottawa Chamberfest and the University of Montreal. The quartet’s debut disc opens with Benjamin Britten’s all too rarely heard String Quartet No.1 with its angelic opening high-string chorale over pizzicato cello before transitioning into a caccia-like Allegro vivo. The extended Andante calmo third movement eventually leads to a playful finale in which the strings seem to be playing tag. This is contrasted with Samuel Barber’s gorgeous Molto Adagio extracted from his String Quartet in B Minor Op.11. Of course we are familiar with this “Adagio for Strings” in its standalone string orchestra and a cappella choral versions, but I must admit to have mixed feelings about having it cherry-picked in the context of a string quartet recording. Generous as the disc’s 65-minute duration is, there was ample space available to have included the quartet’s outer movements as well (less than ten minutes between them), but that is a minor quibble. Murphy’s single-movement work is next up, opening forebodingly, as many of her works do, before changing mood abruptly to a rhythmic and roiling second half featuring abrasive chordal passages and Doppler-like effects. The final work, producer James K. Wright’s String Quartet No.1 “Ellen at Scattergood” is in four somewhat anachronistic movements. It could have been written a century ago, but is none the worse for that. A pastoral depiction of life at the cottage of a couple of friends, it was commissioned by the husband as a gift for wife Ellen.

This maiden voyage for the Andara Quartet with its warm and convincing performances bodes well for their future, and for chamber music in this country. I also note that the triennial Banff Competition is still going strong 30 years after its inauguration – the first prize winner in 2022 was the Isidore Quartet (USA) and the Canadian Commission Prize went to Quatuor Agate (France). This year’s required work was by Dinuk Wijeratne and it’s great to realize that all nine of the competing quartets from around the world have taken that new Canadian work into their repertoires. Even more exciting is when a young quartet like the Andara takes on an earlier competition’s work and gives it new life as they have done with Dark Energy.