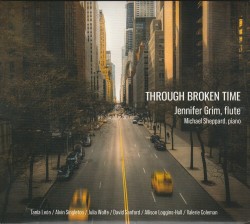 After 20 years working alongside Robert Aitken you might be forgiven for thinking I’d have heard enough flute music to last a lifetime and indeed there are times when I have said that a little flute goes a long way. That sentiment notwithstanding I encountered a lovely disc this month that put the lie to that. Through Broken Time features Jennifer Grim in contemporary works for solo and multiple flutes, some with piano accompaniment provided by Michael Sheppard (New Focus Recordings FCR346 newfocusrecordings.com). I had put the disc on while cataloguing recent arrivals without paying undo attention until the bird-like sounds and Latin rhythms of Tania León’s Alma leapt out at me. I had just finished listening to Victoria Bond’s disc, and it was as if I were back in the jungle dreamed of by the caged bird mentioned above.

I suppose it was inevitable that I would find Julia Wolfe’s Oxygen for 12 flutes (2021) reminiscent of Steve Reich’s Vermont Counterpoint for flute and tape or 11 flutes, which I first heard in Ransom Wilson’s multi-tracked recording some four decades ago I don’t mean to say that Wolfe’s work is derivative of that classic, but that the orchestra of flutes, in this case involving all the regular members of the flute family rather than Reich’s piccolos, C and alto flutes, and especially the consistency of sound from part to part as a result of them all being played by one flutist, has a familiarity, especially in the context of Wolfe’s post-minimalist style. The addition of bass flute to the mix fills out the wall of sound, the density of which can at times be mistaken for a pipe organ. The liner notes also liken the piece to Stravinsky’s Symphonies of Wind Instruments but whatever the forebears, Wolfe has made this flute choir her own and Grim rises to the occasion in spades.

David Sanford is represented by two jazz inspired works, Klatka Still from 2007, and Offertory (2021), the first a homage to trumpeters Tony Klatka and Tomasz Stanko, and the second inspired by the extended improvisations of John Coltrane and Dave Liebman. The disc also includes solo works by Alvin Singleton and Allison Loggins-Hull – this latter a haunting work that meditates on the devastation wreaked by hurricane Maria, social, political and racial turmoil in the United States, and the Syrian civil war – and Wish Sonatine by Valerie Coleman, a dramatic work that conveys brutality and resistance and which incorporates djembe rhythms symbolizing enslaved Africans. Grim proves herself not only comfortable but fluent in all the diverse idioms and the result is a very satisfying disc.