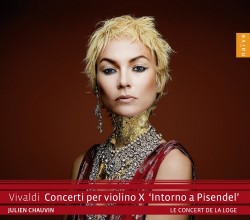 The Vivaldi Edition, the ongoing project to record some 450 works by Vivaldi in the Biblioteca Nazionale in Turin, reaches its 69th volume with Vivaldi Concerti per violino X ‘Intorno a Pisendel’, with Julien Chauvin as soloist and director of Le Concert de la Loge (Naive OP 7546 bfan.link/vivaldi-concerti-per-violino-x-intorno-a-pisendel)

The six works here are all linked to the virtuoso violinist Johann Georg Pisendel (1687-1755), a major figure at the Dresden court who met Vivaldi in Venice on a court visit in 1716-17 and became a friend and pupil. Pisendel copied many of Vivaldi’s works and also received several dedicated manuscripts.

Chauvin is outstanding, his bright, clear tone, faultless intonation and virtuosic agility perfectly backed by the resonance and effective dynamics of the orchestra, all beautifully recorded. And yes, a lot sounds like The Four Seasons, but there’s a continual freshness to the music that makes each concerto a real delight.