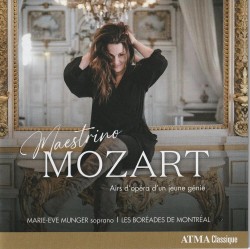 Munger, already known as a skilled and musical Mozart interpreter, continues to impress, especially in the three arias from Mitridate and in Lucio Silla’s In Un Istante Oh Come – Parto m’affretto. Throughout Maestrino Mozart, Munger’s voice is warm, her technique is flawless and the coloratura light and agile. Her attentive musicological research is shown in the intelligent and careful consideration with which she brings Mozart’s various characters and stories to life. Munger’s accomplishments reach beyond the music presented; Maestrino Mozart shows that Mozart’s early arias, often considered immature and discarded, are in fact rich works encompassing many of the beloved musical elements Mozart develops further in his later works. Maestrino Mozart should not only please Mozart enthusiasts, it is worthy of both discovery and further performances.