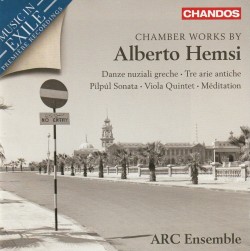 Greek Nuptial Dances, Op. 37bis: I. In Honour of the Mother-in-law - Listen on Spotify

Three Ancient Airs, from the Coplas Sefardies, Op. 30: I. Ballata - Listen on Spotify

This latest Music in Exile CD spotlights Anatolia-born Alberto Hemsi (1898-1975). In 1922, during the Greco-Turkish War, Hemsi fled to Rhodes, then moved to Egypt in 1928, founding and conducting the Alexandria Philharmonic Orchestra. He finally emigrated to Paris in 1957, Egypt’s Jews being non-grata following Israel’s Suez invasion.

The nine-minute Three Ancient Airs, Op.30 (c.1945) are settings for string quartet of three of the 60 songs in Hemsi’s Coplas Sefardies. Ballata evokes a sultry dance, Canzone a plaintive serenade, Rondò a children’s game song. These melodies, accompanied by guitar-like plucks, reflect Sephardic Jews’ enduring ties to Spain, their homeland before being expelled in 1492.

Once again, Toronto’s splendid ARC Ensemble (Artists of the Royal Conservatory) has redeemed a deserving composer from unwarranted “exile” in this important ongoing series.