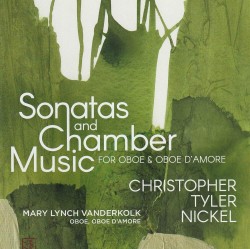 Featuring the talents of oboist Mary Lynch VanderKolk, the new album Christopher Tyler Nickel: Sonatas and Chamber Music for Oboe and Oboe d’amore masterfully explores the full range and lyrical aspects of the oboe while spiritedly challenging its technical capabilities.

Opening with the Oboe Sonata specifically composed for VanderKolk, Nickel’s own familiarity with the oboe is clearly demonstrated as he insightfully captures the strengths of the player – creating beautifully sweeping lines that showcase VanderKolk’s colourful and lyrical capabilities as she artfully navigates the dynamic and rhythmic passages in a way that only the most consummate performer could.

Imagining the pensive sadness of the lone instrument at twilight is what one may experience as they listen to Nickel’s second piece of this collection, the Oboe d’amore Sonata. Perhaps seemingly absurd or contradictory… the tenebrous quality of the oboe d’amore truly shines in this technically challenging and yet melancholically dazzling achievement.

The narrative in the third instalment of Nickel’s delightful and most recent exploit can be summed up in one simple word… virtuosic. The Suite for Unaccompanied Oboe, features contrasting movements that explore mixed articulations, lustrous technical flourishes and dramatic leaps over the full range of the instrument. VanderKolk’s interpretation and execution of this work make it absolutely breathtaking.

The album concludes with the Quintet for Oboe d’amore for the namesake instrument and string quartet in a uniquely distinctive composition drawing the listener in with the dark, melancholic timbre of the double-reed instrument traditionally only heard in Baroque music, making this piece the first of its kind and a true testament to this Canadian composer’s proclivity for the oboe family and ability to fashion narrowly defined aspects of both music and the instrument into a broader phenomenon.