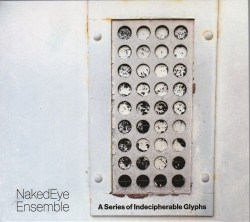 Were I to throw a large party, I’d set this new release on random shuffle until enough guests noticed that the tracks were beginning to sound familiar. The selections are alternately stimulating and mesmerizing. NakedEye Ensemble, out of Pittsburgh, have hitched their axes to Frank Zappa’s star, and his legacy. He left so much music still to be explored, it’s high time more groups put together arrangements like track 11, Zappa’s Sinister Footwear II. With the recent agreement between the Zappa family trust and Universal Music, we’ll likely hear more renditions of his extraordinary work.

Rhythmically exacting and full of rapid, jagged melodic passages, shared by multiple unison voices, Footwear is just the right follow-up to a more mysterious and occasionally tiresome work of AI meets improv, Nick Didkovsky’s Amalia’s Secret. I’m allowing some oldster grump when it comes to art that’s in part generated by algorithms. Some of it is pretty cool, but some of it just sounds… mechanical? I imagine my party guests won’t much care about how the ten brief segments were generated. I’ll just go open more wine.

Following are five more tracks, two that drop clocks (yet MORE automatism!!) into the mix. [These Hands] Hold Nothing by Whitney George ticks and tocks, and Dum Spectas Fugio by Rusty Banks clunks and clonks; both beat more or less at 60 per minute, and then Less is More by Molly Joyce (in performance accompanied by a light show) raises the pulse while easing into meditation. They’re all much better pieces than I’m making them sound, and the playing is gorgeous.

Rounding out the disc, Aaron Jay Myers’ Strabimus and Richard Belcastro’s Nepetalactone take up the Zappa-ista torch. The latter title is the psychoactive ingredient in catnip. Fun stuff, well played.