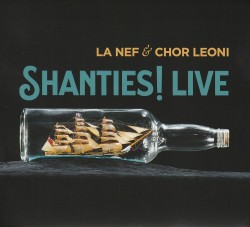 Haul On The Bowline

There could be nothing more eminently singable and danceable than sea shanties – those apparently unforgettable work songs from the 19th century. Fortuitously – perhaps even providentially – proud Canadians (particularly of the Scottish diaspora) continue to keep the cultural flame of the shanty alive. There is much to choose from; shanties – creations of the peripatetic merchant mariner – grew out of the French “chanter” fused into boisterous barn-dancing songs, merrily sung by British mariners into a pint of lager across the ocean to North America. Many have made it to this outstanding live recording.

Two celebrated traditional music groups – Montreal’s La Nef and Vancouver’s Juno-nominated Chor Leoni, came together for a one-night-only performance of brand new arrangements of these work songs on the resplendent Shanties! Live. It would be a minor travesty to suggest that all praise for this performance accrues to members of La Nef, albeit the fact that the ensemble’s fame is owed to their iconic soundtrack for Ubisoft’s Assassin’s Creed video game. The participation of the iconic Chor Leoni has – together with arrangements by Seán Dagher and the Chor directed by Erick Lichte – turned this rare collaboration into something truly special.

Rip-roaring shanties such as Haul on the Bowline and the stomach-churning Stormalong John provide thrill-a-minute excitement. Meanwhile the profound beauty of Lowlands Away, Shallow Brown and Le 31 du mois d’août, and the sublime fidelity of the recording make this classic sea shanties disc truly spectacular.