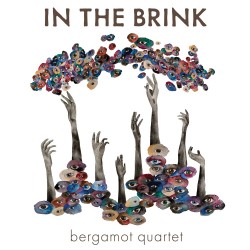 In the Brink: II. Flood of Ashes - Listen on YouTube

I was unfamiliar with the Bergamot Quartet before their recording In the Brink (New Focus Recordings FCR316 newfocusrecordings.com). Founded at the Peabody Institute in Baltimore in 2016, the quartet is “fueled by a passion for exploring and advocating for the music of living composers” and this disc is certainly a testament to that. It opens with a work by American cellist and composer Paul Wiancko, commissioned by the Banff Centre for the Toronto-based Eybler Quartet during the 2019 Evolution of the Quartet festival and conference. (The Eybler were on the faculty and the Bergamot were participants in the program that year.) Ode on a Broken Loom is evocative of a spinning wheel and its rhythmic drive is compelling. Tania Léon’s Esencia (2009) is a three-movement work that incorporates influences from the Caribbean and Latino America, cross-pollinated with Coplandesque harmonic overtones. Suzanne Farrin’s Undecim (2006) is the earliest work here, and is in some ways the most intriguing. The composer says it was written “when I was thinking about how memory could be applied as a process in my music. I was fascinated by the long lifespan of stringed instruments. In this work, I liked to imagine that the bow remembers all of the repertoire of its past and could […] utter articulations of older pieces in an ephemeral, non-linear [gloss on] the present.” It’s a wild ride. The final work, the group’s first commission, is by first violinist Ledah Finck. In the Brink (2019) adds a drum set (Terry Feeney) to the ensemble, and requires the string players to vocalise, exclaim and whisper while playing. Not your traditional string quartet!