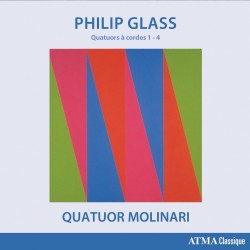 The latest release by Montreal’s Quatuor Molinari is Philip Glass – Complete String Quartets Volume One (ATMA ACD2 4071 atmaclassique.com/en). Glass continues to add to the repertoire – he has eight quartets so far – heedless of those artists who have already published “complete” recordings. The first four are arranged here in a non-sequential, but quite effective order. String Quartet No.2 “Company” – with its haunting opening – is first up, followed by No.3 “Mishima” which was adapted from the soundtrack of the film by that name. Both of these works reflect Glass’ mature minimalism and it comes as a bit of shock when they are followed by his first venture into the genre, written in 1966 before he developed his signature style. This quartet is more angular and searching, although it too features a cyclical return to its starting point, a feature that the notes point out may “evoke for some the mythical Sisyphus, condemned to eternal repetition.” String Quartet No.4 “Buczak” – commissioned as a memorial for artist Brian Buczak – returns us to more familiar ground – its slow movement is even reminiscent of the opening of the second quartet – and brings an intriguing disc to a fitting close.

This Molinari release is digital only at the moment, but on completion of Volume Two, ATMA says they will be issued together as a double CD. Although founder Olga Ranzenhofer is the only remaining original member of the quartet, which has undergone myriad personnel changes in its 25-year history, the Molinari sound remains consistent and exemplary, and their dedication to contemporary repertoire is outstanding. Molinari’s impressive discography now numbers 14 in the ATMA catalogue, and includes such international luminaries as Gubaidulina, Schnittke, Penderecki, Kurtág and Zorn, along with Canadians Jean-Papineau Couture, Petros Shoujounian and the 12 quartets of R. Murray Schafer.