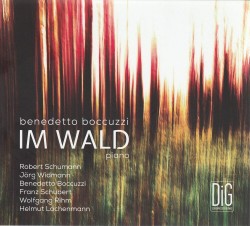 Another disc that falls between two worlds is Im Wald conceived by, and featuring, pianist Benedetto Boccuzzi (Digressione Music DCTT126 digressionemusic.it). In this instance the two worlds are the piano music of the late classical/early Romantic era, juxtaposed with contemporary works by Jörg Widmann, Wolfgang Rihm and Helmut Lachenmann. While purists will likely be offended by the imposition of sometimes abrasive works into such beloved cycles as Schumann’s Waldszenen and Schubert’s Die schöne Müllerin (in a piano arrangement) I personally find it refreshing and even invigorating. The first half of the disc involves a complete performance of the Schumann (Forest Scenes in English) with selected movements from Widmann’s Elf Humoresken (11 Humoresques) interspersed. Then as a “palette cleanser” Boccuzzi inserts an electronic soundscape of his own creation, Im Wald (Into the Woods). In the second half of the disc we hear eight of the 20 movements of the Schubert, this time “interrupted” by a Ländler by Rihm and Fünf Variationen über ein Thema von Schubert (not from Die schöne Müllerin) by Lachenmann. This latter is of particular interest to me as it is an early melodic work (1956) that predates the mature style I am familiar with in which Lachenmann focuses mainly on extra-musical timbres achieved through extended instrumental techniques. Boccuzzi is to be congratulated not only for the overall design of this project, but for his understanding and convincing realization of the varying esthetics of these diverse composers.