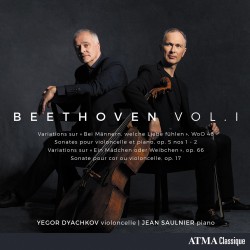 Beethoven Vol.1 is the initial digital release in a new series of the Complete Sonatas and Variations for Cello and Piano featuring cellist Yegor Dyachkov and pianist Jean Saulnier. The series will be launched in both digital and physical format, with the second digital volume available in September and a complete 3CD physical set due for release in October (ATMA Classique ACD2 4046 atmaclassique.com/en).

The central works on this first digital volume are the Cello Sonatas No.1 in F Major Op.5 No.1 and No.2 in G Minor Op.5 No.2. Both were written in late 1796, and mark the beginning of Beethoven’s development of the cello and piano sonata as an equal partnership.

The two sets of variations are both on themes from Mozart’s The Magic Flute: the 12 Variations on “Ein Mädchen oder Weibchen” Op.66 and the 7 Variations on “Bei Männern, welche Liebe fühlen” WoO46. The Horn Sonata in F Major Op.17, in the cello version prepared by Beethoven himself, closes the disc.

Dyachkov is a professor at McGill’s Schulich School of Music, and he and Saulnier both teach at the Université de Montréal. Their performances here are intelligent and beautifully nuanced, promising great things for the works still to be released.