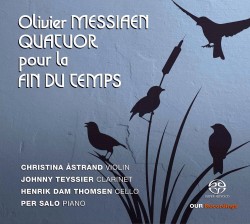 The final classical selection this month is Olivier MESSIAEN QUATUOR pour la FIN DU TEMPS (Our Recordings 6.220679 ourrecordings.com). The quartet is the only chamber-ensemble piece composed by Messiaen, and was written during his internment at a Silesian German POW camp in 1940-41. It is scored for musicians who were fellow prisoners in the camp, a violinist, a clarinettist and a cellist, with Messiaen himself at the piano. Messiaen was a deeply religious person and served as organist at l’Église de la Trinité in Paris for most of his career, even after he became world renowned as a composer. The eight movements of the Quatuor, with the exception of a brief Interlude, are based on biblical themes with titles such as Liturgy of Crystal, Praise for the Eternity of Jesus and Dance of Fury for the Seven Trumpets (of the Apocalypse).

The musicians on this recording, violinist Christina Astrand, clarinettist Johnny Teyssier, cellist Henrik Dam Thomsen and pianist Per Salo are all principals in the Danish National Symphony Orchestra and their performance is flawless. (My only quibble is the abrupt cutoff of the final note of the opening movement). Their unisons are so aligned that I keep finding myself straining to try and figure out just how many of them are playing at any given time. And Teyssier’s dynamic control when building from absolute silence in his solo movement, Abîme des oiseaux, is amazing! But the real reason to add this disc to my extensive Messiaen collection was the excellent essay by Jens Christian Grøndahl. It incorporates passages based on eyewitness testimony, descriptions and statements from Rebecca Rischin’s book For the End of Time: The Story of Messiaen’s Quartet, as well as Messiaen’s own preface to the score and excerpts from the Book of Revelation. There is also a translation of three stanzas of the poem Enfant, pale embryon (Child, pale embryo) by Messiaen’s mother Cécile Sauvage who said “I suffer from an unknown distant music” before the composer’s birth. It’s truly enlightening.