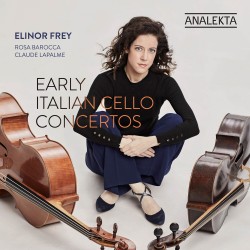 After immersing myself in the dense, lush – I keep wanting to say “at times lugubrious,” but that’s not right, they are simply thick, rich and gorgeous – textures of Brahms and Strauss, I found I needed a palette cleanser. A new Analekta release, Early Italian Cello Concertos featuring Elinor Frey and Rosa Barocca under Claude Lapalme (AN2 9163 analekta.com/en), proved just the thing. In her extensive and informative booklet notes Frey discusses the development of the violoncello, describing it as actually a family of instruments originating with the violone, a small type of bass violin current in the 17th century. “Only beginning in the 1720s did a sort of ideal compromise instrument, of a size halfway between the smallish Baroque violoncello and the larger violone, establish itself as our current standard cello. The term violoncello piccolo, often used today to denote the typical Baroque violoncello, is in part a modern invention – an anachronistic misnomer […which] only makes sense when used in comparison with our larger modern instrument.” She also discusses the differences between four- and five-string versions of the cello.

For this recording – which includes works by Sammartini (1700-1775), Vivaldi (1678-1741), Tartini (1692-1770) and Leonardo Leo (1694-1744) – Frey uses two different instruments, the smaller Baroque size in the Sammartini and Tartini, and the modern size for Vivaldi and Leo. These latter she says “have inspired quite a few modern-day cellists to perform on a five-string instrument, in part because of the fiendishly difficult passagework that ascends into the upper register. […] Over time I came to view these works as demanding and thrillingly virtuosic concertos that belonged to the larger four-string cello repertoire.” Thrilling virtuosity is especially true of Leo’s Concerto No.2 in D Major, which I first encountered in Anner Bylsma’s recording with Tafelmusik back in my days at CJRT-FM; it became a favourite and I programmed it frequently, both on Music Before 1800 with Peter Keigh and during regular morning broadcasts with Alex Baran. As seminal as that recording was in my developing an interest in Baroque music, I must say that Frey and Rosa Barocca, a Montreal ensemble of which I was not previously aware, surpass this forerunner in terms of crispness, energy and articulation. From start to finish this disc is enthralling; my only quibble is the choice to end the recital with a minor key Andante cantabile movement from a violin sonata by Tartini, one of two Frey transcriptions to grace the disc. I would have preferred it to end with a bang, not a whimper, lovely though it is.