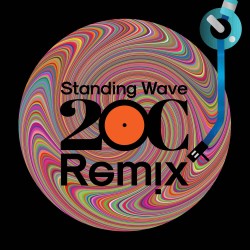 The Spins - listen on google drive

Nicole Lizée is also among the seven composers commissioned by Vancouver’s venerable Standing Wave ensemble for its project 20C Remix (Redshift Records standingwave.ca) in which a number of iconic 20th century works are reimagined for the new millennium. With three decades under its belt, Standing Wave is touted as Western Canada’s foremost contemporary chamber ensemble. 20C Remix – a digital release with a limited edition vinyl run – opens with Stone’s Throw, Jocelyn Morlock’s ebullient take on Ann Southam’s Glass Houses No.9, adapted for full ensemble: flute, clarinet, violin, cello, piano and percussion. It’s a roller coaster ride for all concerned and I particularly enjoyed finding hints of Stravinsky in the mix. Jennifer Butler enhances Messiaen’s Le merle noir for piano and flute with the other members of the ensemble in a fairly straightforward and effective homage to the French master. Walking in Claude’s Footsteps is Jordan Nobles’ gentle take on Debussy’s Des pas sur la neige and Jared Miller finds Guilty Pleasures in his interpretation of John Adams’ China Gates. Unlike most of the works here which enlarge the original forces, Chris Mayo and Bekah Simms take orchestral textures and adapt them for the sextet. Mayo’s Oh Come Now! There is a Beautiful Place! is an arrangement “on a relatively miniature scale” of Reinhold Glière’s mammoth Symphony No.3. Although the liner notes tell us that the title is taken from a poem by Kenneth Patchen, there is no explanation of how this relates to the symphony and I’m left scratching my head. Simms’ Tenebrose explores the “night music” from the third movement of Bartók’s Music for Strings, Percussion and Celesta with “approaches that I feel the composer would have been likely drawn to had he lived into the 21st century,” including microtonal glissandi and the use of non-tempered pitches while incorporating familiar motifs from the original. Lizée is represented with two tracks, her own inimitable treatments of songs by pop icons Dead or Alive (You Spin Me Round) and Justin Timberlake (Cry Me a River). While certainly a different sensibility from the other offerings here, they somehow manage to fit in seamlessly. I particularly enjoyed the bass clarinet and vibraphone lines in Epiphora, her take on Timberlake’s classic, which bring this very satisfying disc to a close.