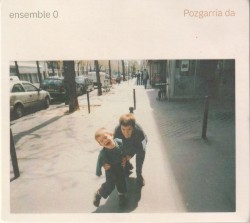 I first heard the music of Petar Klanac (then known as Pierre-Kresimir Klanac) at Glenn Gould Studio back in November 1997 as part of New Music Concerts’ contribution to the Made In Canada Festival, and then in 2000 on the Ensemble contemporain de Montréal CD Nouvelles Territoires 1. In the intervening years he had fallen off my radar until a few weeks ago when he reached out to me about his new CD.

Klanac has a surprisingly small presence on the Internet. The little biographical information I’ve been able to glean tells me that his principal instruments are violin and electric guitar and that he studied composition with Gilles Tremblay at the Montreal Conservatoire from 1992 to 1995 and later with Gérard Grisey and Marco Stroppa at the Paris Conservatoire and Denys Bouliane at the Rencontres de musique nouvelle du Domaine Forget in Charlevoix (Québec). He was a child chorister in the Maîtrise des Petits Chanteurs du Mont-Royal (Saint-Joseph’s Oratory, Montreal) for nine years and this seems to have strongly informed his compositional aesthetic. That first piece I heard was titled Le ressuscité de Béthanie (on the subject of the resurrection of Lazarus), a theme to which he returned two decades later in a work for Ensemble Nahandove. Many of the works in his oeuvre focus on religious themes, such as Agnus Dei for men’s choir, Pater Noster for tenor and string quartet and Sancta Parens for two saxophones and cello. When commissioned by the Société de musique contemporain du Québec to compose a new work for its 55th anniversary concert last December he presented the 18-minute chamber ensemble work Yerushalayim.

Klanac has made his home in France for some time and his latest project, Pozgarria da (petarklanac.bandcamp.com), was commissioned by Ensemble 0, a group whose members are based in different cities in France, Catalonia and Belgium, as part of 30th anniversary celebrations for the Institut Culturel Basque. Pozgarria da (How wonderful it is) is a setting of four poems by the Basque Franciscan Father Bitoriano Gandiaga for voice (Fanny Chatelain singing in the original language) and an unusual ensemble consisting of flutes, rebec and nyckelharpa, four organs, gamelan selunding and percussion. There is a sparse instrumental prelude and two interludes, all titled Maite dut bizitza (I love life), separating the first three poems, whose sparse and subdued settings are vaguely reminiscent of medieval music. The final movement, also Maite dut bizitza, is the most expansive by far at almost 17 minutes, and is also the most exuberant; a flamboyant minimalist – think cinematic Philip Glass – paean to “The joy of life / To my surroundings / that are alive. / I wish the joy of being alive / To everyone who lives / the grace of life.” Amen! A very welcome anthem and reminder in these unjoyful times.