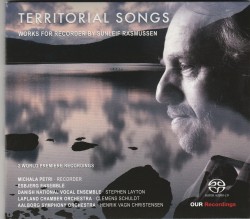 The following review is an excerpt from Editor's Corner (July 2021) which can be read in its entirety here.

I first became aware of Danish recorder virtuoso Michala Petri during my tenure at CJRT-FM in the early 90s when I picked up an RCA CD on which she performed contemporary concertos, including one by Toronto’s own Gary Kulesha. I found it compelling and intriguing and I think it was the first time that I had heard a recorder as an orchestral solo instrument. Since her debut at age 11 Petri has toured the world and performed more than 4,000 concerts, with repertoire spanning the Renaissance era to the present day. She has commissioned more than 150 works and is a tireless champion of living composers; her discography extends to 70 critically acclaimed recordings. Petri’s latest CD, Territorial Songs – Works for Recorder by Sunleif Rasmussen (OUR Recordings 6.220674 ourrecordings.com), presents works in a variety of genres by that celebrated Faroese composer, including the unaccompanied Sorrow and Joy Fantasy, Flow for recorder and string trio (meant to be a companion piece to Mozart’s flute quartets mentioned elsewhere in these pages, performed here with members of the Esbjerg Ensemble), “I” with a cappella choir (Danish National Vocal Ensemble), Winter Echoes with 13 solo strings (Lapland Chamber Orchestra), and the title work, a concerto with full orchestra (Aalborg Symphony under Henrik Vagn Christensen). Territorial Songs is the earliest work presented here, composed in 2009 for Petri when Rasmussen was composer-in-residence with the South Jutland Symphony Orchestra. The soloist uses various members of the recorder family – soprano through tenor – in the different movements. There is an “anti-cadenza” in which Petri is called upon to sing and play her instrument simultaneously, a lyric episode “providing a colourful contrast to the non-stop pyrotechnics” heard elsewhere in the concerto. In the concluding section, before the tolling bells of the opening return, the soloist “pushes the recorder’s virtuosity to its limits, with triple tonguing, rapid chromatic figuration, breathtaking waves of rolling triplets and punishingly difficult octave leaps.” It’s an exhilarating ride handled deftly with seeming ease by Petri. Don’t miss the train, get on board!

Globally distributed by Naxos. Available through all major music retailers, download, and streaming sites, including TIDAL, Primephonic, IDAGIO and NativeDSD.