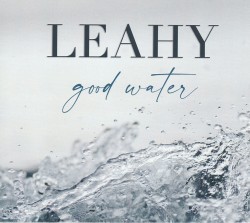 It would be redundant to attempt to summarize the incredible musical contribution that has been made to Canada, and to the world, by this award-winning, exceptionally talented Celtic-Canadian family. On this latest Leahy release, every track is a rare emerald. Although perhaps not totally in the traditional bag, it’s still a trans-world-folk family affair – featuring Denise on vocals; Erin on piano, fiddle and vocals; Frank on drums; Julie Frances on vocals, piano, keyboards and acoustic guitar; Maria on acoustic guitar, mandolin and vocals; and Siobheann and Xavier on accordion. Produced by the iconic David Bottrill, Leahy manages to blur all of the lines, and in so doing, manifests a techno-organic masterpiece.

The title track has a sumptuous, angelic vocal intro followed by a contiguous, poetic vocal line of almost unbearable beauty – an uplifting feeling of an ancient one-ness… a statement that moves beyond the Irish diaspora. No doubt, the ancient Leahy DNA is rife with incredible instrumental technique, as well as the rare gift of being able to transmute and share emotion.

Other brilliant tracks include Friend, which invokes the heartbeat of Mother Earth herself, blissfully intermingled with an ecstatic wall of sound and rich, layered “blood harmony” and also Star of the Sea, which is a radiant highlight of fiddling, odd measures and a ballistic arco attack that channels the Tuatha de Danann themselves. Of special significance is My Old Man – a lush, sonorous, melodic reverie, filled with ethnic memory and longing. This gorgeous track is a tribute to the Leahy patriarch from two generations prior – singing out from the passing of time – blessing his descendants as they live their authentic musical traditions, creating fearlessly into the future.