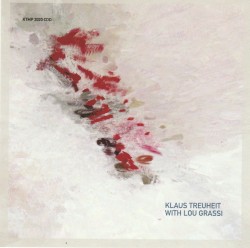 The physical qualities of time – that indefinite, continuous progress of existence from past to future – seem ever-present in the conception and execution of the art of Klaus Treuheit. You hear it in the sound and silent spaces of his soundscapes, as the black dots of the page leap and gambol in linear and elliptical arcs, propelled forever forward. As a highly imaginative thinker, Treuheit utilizes form and space to innovatively develop musical architecture seemingly created in spectral dimensions.

Sound also has a natural momentum in Treuheit’s world; dynamism seems to grow out of his atomic pianistic pulses. All of this is superbly reflected in the music of Prickly Tenacity/Sublime Sensations and Serracapriola - Live, a double album he shares with the deeply empathetic percussion-colourist Lou Grassi, who sounds as if he has a similar philosophical bent of mind.

Treuheit is also supported on Prickly Tenacity/Sublime Sensations (the first of the two discs) by Georg Wissel who is known to be a master of sculpting compressed air by means of reeds and other devices. Grassi plays drums, cymbals and miscellaneous percussion on this trio disc. The repertoire here is split between the six movements constituting Prickly Tenacity, followed by four sections that form Sublime Sensations. A kind of invisible propulsive force shapes the massive architecture of the music.

Grassi and Treuheit return to perform an extended, live duet in Serracapriola (disc two). This improvised musical dialogue, is created in the spur of the moment by two like-minded artists. Grassi bends and shapes time with sticks, mallets and brushes, alternately caressing the skins and stirring up moments of rumble and thunder on a myriad of drums and orchestral timpani, his phrases often punctuated by the sizzle and swishing of cymbals. Treuheit joins in the proceedings on an organ producing cascades of tumbling arpeggios, great wheezing, thumping chords and short stabbing gestures  which punctuate the music. Together, the musicians challenge us to listen, with wide-open ears, to music that references the past, but is rooted in the moment, while all the time charging relentlessly into the future.

This is truly impactful and memorable music by Grassi and Treuheit (with Wissel’s contributions on disc one). It is an idiomatic musical palimpsest; a triumph of time created with uncommon musicality and delivered in performances of monolithic, yet superbly dynamic power.