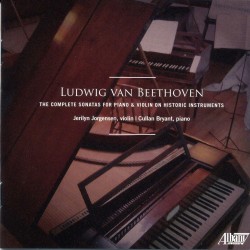 This handsome and beautiful 4-CD set features Cullan Bryant playing five different keyboard instruments from the Frederick Collection of Historic Pianos in Ashburnham, Massachusetts, including an instrument built around 1805 by Casper Katholnig that had been part of the estate of the Esterházys in Eisenstadt and others by Joseph Brodmann, Johann Tröndlin and Ignaz Bösendorfer from Leipzig and Vienna. Jorgensen plays a violin built in 1797 by Andrea Carolus Leeb and employs a number of different historical bows. A great deal of care has been given to creating a specific sound world for the performance of each sonata and in all cases this produces an added element of a wide palette of aural colours that is missing from most modern instrument recordings of these brilliant works.

Unlike Beethoven’s string quartet output, which stretches across all the periods of his remarkable career, his ten sonatas for piano and violin were written in a shorter span of time – between 1797 and 1812. There are two sets of three sonatas each – Op.12 and Op.30 – and single sonatas Opp. 23, 24, 47 and 96. As the excellent liner notes to this CD collection point out, what make these sonatas so interesting is that they feature the two instruments that Beethoven played exceptionally well. He was an active violinist in his early life in Bonn and, of course, played piano throughout his life.

Each of these ten works is a strong, inventive, captivating piece that charts a growing independent compositional style, culminating with Op.47 – the most famous sonata, dedicated to the French violinist and composer Rodolphe Kreutzer – and the powerful and unique Op.96 in G Major. Like the quartets, the early sonatas owe a great deal, formally and stylistically, to Mozart, Haydn and Antonio Salieri. As we move to the later works, Beethoven’s unique and original style – and all of those strong and contrasting voices that we appreciate so deeply – emerges.

The performances of Bryant and Jorgensen are of a uniformly high standard; risks are taken and, as mentioned above, the musical colours are vibrant. The early pianos also remind us of the percussive nature of the instrument and give a picture of what Beethoven was seeking with his articulation and dynamic markings. Many thanks to these two fine musicians for a thoughtful and musically satisfying recording.