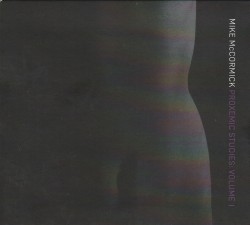 It is not an obvious concept to combine technical guitar exercises you wrote for yourself with extracts of letters and emails from your former “romantic partners” as a basis for an album of contemporary music. Yet this is what Oslo-based guitarist, laptop performer and composer Mike McCormick, originally from Yellowknife, has done with his Proxemic Studies. The album is both intensely personal (some of the quotations detail sexual intimacy, heartbreak and betrayal) and surprisingly clinical. Befitting our social distancing times, McCormick tells us “Proxemics [is] the branch of knowledge that deals with the amount of space that people feel it necessary to set between themselves and others.” McCormick performs his compositions with Laura Swankey (voice), Emily Denison (trumpet) and Knut Kvifte Nesheim (percussion). Swankey’s vocals are expressive yet measured and Nesheim provides a delicate palette of background accompaniments. One of the most beautiful pieces is Alvorada, on which Denison plays some floating and tasteful trumpet lines reminiscent of Kenny Wheeler, and the vocal intermittently glides between the musical lines. At the other extreme is Madness with fuzzed-out guitar and a series of accusatory and harsh statements vibrating with anger.

The album is intriguing, but one may wonder how McCormick’s former partners feel about their intimate notes being part of a public performance. The text ranges from poetic to banal (“Just got out of the shower, you were kind of there too”) and this contrast may be one of the points being made about human interaction. Proxemic Studies is an uneasy intertwining of personal history with innovative musical expression.