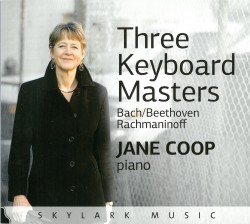 Veteran pianist Jane Coop brings three composers into focus on her new fall release: Beethoven, Rachmaninoff and Bach. While the aggregate of the music on disc is indeed a favourable one, the record as a whole tends to play more as a recital program than as an album. Coop’s musical conviction and integrity merits discussion of each component, singly:

Her choice to record the seven jejune Bagatelles Op.33 of Beethoven is a fruitful one. Coop brings a childlike exuberance to this music, augmented by just the right dash of buffoonery. She achieves an essentially scherzando quality, from which the personal side of Beethoven’s art can gleam. Coop has a zeal for these pieces, expert in the Canadian tradition of Beethoven pianism inherited from her teacher, the great Anton Kuerti.

In drastic juxtaposition, a set by Sergei Rachmaninoff plunges in next. Despite the extreme textural disparity between Rachmaninoff’s preludes and Beethoven’s bagatelles, Coop seems easily at home in the vaulting halls of Russian Romanticism. One hears an icy, almost Gouldian austerity. Punctuating the preludes are lesser-known transcriptions by Rachmaninoff, penned late in the composer’s life and intended for his own concert tours.

Finally, Bach’s Chromatic Fantasy and Fugue brings a sense of homecoming. One has the suspicion that each of these pieces has been well-worn and well-loved by Coop; this is music she’s held dear for a long time. How generous of her then, to share it with us.