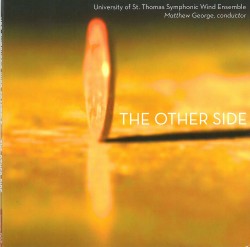 Mysteries of The Horizon: IV. The Discovery of Fire

Everything Starts From The Dot: 1. Staccato Dances

We hear string orchestras in concert halls, backing pop artists and even in the supermarket. Alternatively, we may only have heard concert bands at high school performances or marching in parades. The Minnesota-based University of St. Thomas Symphonic Wind Ensemble (Matthew George, conductor) is a highly skilled ensemble of brass, woodwind and percussion that presents a welcome change in timbre and material. They have a long history of commissioning works and this is their seventh album in that series.

One of the album’s highlights is the opening B-Side Concerto – For Rock Band and Wind Ensemble by Spanish composer Luis Serrano Alarcón. This 16-minute work showcases both the wind orchestra and the rock band and contains great rhythmic riffing sections, some odd metre segments and excellent wailing guitar solos. It is a tour de force which manages to incorporate the rock band within the wind ensemble so their distinctive sounds blend to achieve an edgy and exciting effect.

Another highlight, Mysteries of the Horizon (After Four René Magritte Surrealist Paintings) by Nigel Clarke features the virtuoso Belgium cornet player Harmen Vanhoorne. Part 1, The Menaced Assassin, begins with a solo cornet playing a short fanfare and then works into a back-and-forth duel with the wind ensemble containing several angular and sophisticated harmonies and rhythms.

Kit Turnbull’s three-movement Everything starts from a dot (based on a quote from Kandinsky) and a second piece by Alarcón, Symphony No. 2 for Wind Orchestra, are the additional works on this engaging CD.