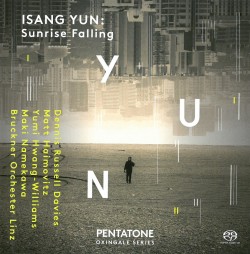 Born in present-day South Korea and later re-establishing himself in West Germany, Yun certainly has one of the most unusual biographies of any composer of Western concert music. His is an epic story of a lifelong fight for Korean national independence and unity, thwarted by exile, all framed by the creation of some of the most emotionally gripping and transculturally cogent music of the 20th century. After establishing an award-winning composing and teaching career in Korea after WWII, in 1956 Yun relocated to Europe to further study composition, settling in Germany. His idiosyncratic style fully emerged in Gasa (1963) for violin and piano, evocatively performed on this album by violinist Yumi Hwang-Williams and pianist Dennis Russell Davies. Its score overlays Schoenberg-derived 12-tone gestures with complex sustained tones imbued with high emotion, the latter, an essential quality of traditional Korean music.

On June 17, 1967 Yun’s life took an extraordinarily dramatic and life-threatening turn. He was kidnapped by the South Korean secret service from his West Berlin home. Taken to Seoul to face trumped-up charges, he was accused of being a North Korean spy even though he had only visited there as a tourist. Tortured in prison, he attempted suicide. He was forced to confess to espionage resulting in a death sentence, subsequently commuted to a lengthy prison term. Yun was eventually released in 1969, in great measure as a result of international outrage at his mistreatment and the injustice of the charge. He returned to a divided Germany never again to go back to his Korean birthplace.

Yun’s dramatic biography informs his mature music – a convincing blend of Korean and European musical instruments, idioms and sensibilities – accurately reflecting the human and political drama and intercultural fabric of his life story. The album’s key works are the full-length Concerto for Violoncello and Orchestra (1976), and Concerto for Violin and Orchestra No.1 (1981), both imbued with autobiographical allusion. Virtuoso cellist Matt Haimovitz assays Yun’s intense score jam-packed with despair, as well as exultation over personal tragedy, with deep musicality and passion. Innovative timbral textures, such as the use of a plectrum on the cello to emulate the kŏmun’go (Korean zither), delight the ear. That technique also adroitly bridges the composer’s mid-20th-century Korean and Central European classical music worlds.

The double album’s booklet concludes on a hopeful note. “100 years after Isang Yun’s birth, the two Koreas still teeter on a razor’s edge, with ever more global ramifications. His music opens the gate to a lost, united land, with Yun’s own heart bleeding but ever hopeful.”