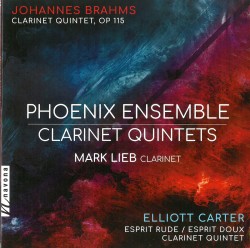 Clarinet Quintet in B Minor, Op. 115 I. Allegro

Lyricism may not be the first quality one associates with the music of Elliott Carter, yet always amidst his confusion of conflicting rhythms there are long melodically pure lines to be sung. Carter’s Clarinet Quintet (2007), offers plenty of the former, but an especially good amount of the latter as well. The performance on this recent release by members of the Phoenix Ensemble (including founder and clarinetist Mark Lieb) rises to the task of finding the way to sing the lines within the exacting demands of Carter’s rhythms. The more contrapuntal playing is virtuosic and seemingly effortless. Lieb has a ready access to the entire range of his instrument, and his rapid articulation is crisp and sure. The quartet playing is even better, or perhaps it’s safer to say theirs is the more friendly material. Oddly, in this late work, the composer assigned great swatches of sustained notes to the wind player, setting off the more interesting material played by the strings.

The same could not be said of Johannes Brahms’ towering late chamber work, the Quintet Op.115 for Clarinet and Strings. All players share in the glory of this final outpouring of the old man’s soul. This disc’s pairing with the Carter quintet is an odd one, so little do the two works have in common beyond instrumentation. The quartet here is still excellent, all in all; the ensemble is good. Their decision to examine the work with slower than conventional tempi in the outer movements is not a success, but I do love the style of the string playing, which is reminiscent of mid-century movie score melodrama.

An excellent rendering of Carter’s Esprit Rude/Esprit Doux, for flute and clarinet, is included between the larger works.