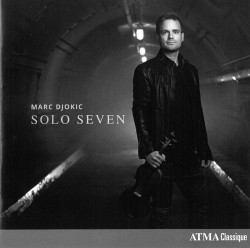 The following review is an excerpt from Editor's Corner (October 2018) which can be read in its entirety in our October 2018 issue.

I begin this month with a hot-off-the-press solo violin release on the ATMA label. Solo Seven (ACD2 2748 atmaclassique.com) features works by seven Canadian composers including several written for the soloist, young scion of one of Atlantic Canada’s most respected musical families. After initial studies with his father, renowned violinist Philippe, Marc Djokic continued his studies in the United States at the Cleveland Institute of Music’s Young Artist Program, the New England Conservatory, and with Jaime Laredo at Indiana University. Winner of the 2017-2018 Prix Goyer, a Prix Opus and a former Instrument Bank recipient from the Canada Council, Djokic is currently artist-in-residence at CAMMAC (the Canadian Amateur Musicians association) and was recently named principal violin of the McGill Chamber Orchestra. Solo Seven marks his recording debut.

The disc begins with two virtuosic, moto perpetuo movements from Richard Mascall’s Sonata for solo violin & Digital FX. The first movement, Labyrinth for amplified violin and digital reverb, which Mascall wrote in 1992 at the age of 19 while a first year undergraduate student, went on to success at the CBC Young Composers’ Competition. In 1993 it was chosen to represent Canada at the International Rostrum of Composers and that same year Mascall completed the five-movement sonata. At The Corner House, a reference to a chic Toronto restaurant where the composer worked for a time, is the final movement and it culminates with a blazing cadenza-like “guitar solo,” actually a transcription of an infamous passage from Eddie Van Halen’s iconic Eruption. I must say that it translates effectively to violin, especially in the hands of this young master.

We are also presented with selections from Noncerto RR3, Noncerto Notre-Dame-de-Grace by Matthias Maute. I was familiar with Maute as the director of Ensemble Caprice and as a flute and recorder soloist, but this was my introduction to his work as a composer. The opening Sparkle – Andantino is a warm and gentle movement where the sparkle is more reflective than effervescent. Chopin – A tempo giusto juxtaposes ebullient arpeggiated sections with contemplative melodic moments. Casareccia – Chaconne Prestissimo, is as you would suspect, primarily boisterous although not without some elongated double-stopped melodic passages, providing an exciting finale.

Vincent Ho’s brief Morning Song, evidently begun and finished while watching a single sunrise, gives respite from the whirlwinds that precede it, somewhat reminiscent of The Lark Ascending. Serbian-born Ana Sokolovic is also represented by excerpts, in this case two movements from Five Dances for Violin Solo which the composer tells us, although modelled on the Baroque suite are actually imaginary dances based on the rhythmic improvisations that are characteristic of the folk music of the Balkans. There are echoes of the Baroque in Kevin Lau’s Tears as well, which he says draws inspiration from Bach’s Chaconne in D minor, “whose dramatic three-part arc influenced the architecture and tonal centre of my own piece”; but also from Berio’s Sequenza VIII, “whose searing narrative made a stunning impression on me as a student.” Lau wrote the piece while a student at U of T in 2006, but revised it in 2017 for the purpose of this recording.

Murray Adaskin’s Vocalise No.1 was composed for clarinet solo in 1989 and adapted three years later for violin and dedicated to Andrew Dawes, founding first violinist of the Orford Quartet. Throughout this work, the composer uses a melody which reoccurs in undulating variations, gradually rising in pitch and giving the impression of moving from darkness to light. Incidentally, it was Andrew Dawes who performed Mascall’s Labyrinth during the CBC Young Composers Competition.

This in effect brings the disc full circle, but wait, there’s more, in the form of an “encore” piece Dystopia by Christos Hatzis. Hatzis tells us that, “Hidden behind the hyper-virtuosity and relative brevity,

this piece is a meditation on the causes of religious intransigence, disenchantment and, ultimately, jihad. The literal meaning of the title (a ‘terrible plac’) refers to the current conflict between narrowly defined religious creeds, particularly the conflict between the Moslem world, and the so-called Western civilization, or modernity.” It provides a timely and fitting coda to this fine recording.

I look forward to further releases from Marc Djokic, and to hearing the other movements of Mascall’s, Maute’s and Sokolovic’s suites on some future occasion.