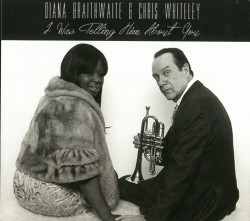 I Was Telling Him About You

The Nearness of You

I WAS TELLING HIM ABOUT YOU from Leib kopman on Vimeo.

The following review is an excerpt from Editor's Corner (May 2018) which can be read in its entirety here.

My initial impression of Diana Braithwaite & Chris Whitely’s new album I Was Telling Him About You (g-threejazz.com) was surprisingly like Aaron Grad’s description of Black Untitled – a slow, deliberate pulse that fluctuates within a narrow range – but like Grad, I mean that in the best possible way. Each of the eight tracks on this lush – I’m almost surprised that Lush Life is not included – recording of vocal jazz standards is andante, a leisurely stroll through some of the best of the genre. What can be said of Braithwaite, other than that her voice is exquisite, and exquisitely suited to this smoky repertoire. The recipient of the 2018 Toronto Blues Society Blues With A Feeling Award (Lifetime Achievement Award), she is equally at home in the worlds of hot blues and cool jazz. Her partner in crime, or at least criminally gorgeous music-making, Whitely is himself an eight-time winner of the Maple Blues Horn Player of the Year – who knew there was such a thing?

My admiration for multi-instrumentalist Whitely – here only trumpet, cornet and vocals, but elsewhere adding harmonica, bass harmonica, guitars and more – again goes back to my formative years when I first encountered the Original Sloth Band in the early 1970s. This trio – comprised of Chris Whitely, his brother Ken and Tom Evans – played more than a dozen instruments, from mandolin to clarinet to accordion and any number of harmonicas, jugs and miscellany between them, and were my introduction to such 20s and 30s classics as Cheek to Cheek, (I Just Want to be) Horizontal, The Sheik of Araby, Gimme A Pigfoot (And A Bottle of Beer) and Heaven to name just a few. The most incredible thing was they would play these many-layered arrangements with six or eight (or more) instruments without overdubbing. Whitely seems to have mellowed some with age, but like a good scotch, that’s the point, isn’t it?

Highlights for me on this latest disc – he’s been a sideman on hundreds of albums over the years, and it’s great to see him sharing the spotlight again – include… no wait, they are all highlights actually, but to give you an idea of what to expect I’ll mention Skylark, The Nearness of You, I’ve Grown Accustomed to Your Face and ’Round Midnight. The one thing you may not expect is the sumptuous version of What A Difference A Day Makes. I grew up with Esther Phillips’ upbeat version, and although I realize now (courtesy of YouTube) that was not always the way it was performed, this very effective laid back version was a revelation to me.

The way that Braithwaite captures the essence of these ballads is enchanting, and the way Whitely’s horn extends her lines is breathtaking.