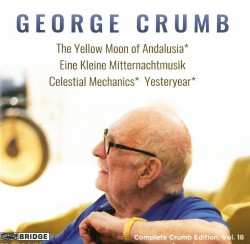 The Yellow Moon of Andalusia: V. Song of the Dead Orange Tree

The Yellow Moon of Andalusia: VI. In the Forest of Clocks

The following review is an excerpt from Editor's Corner (December 2017/January 2018) which can be read in its entirety here.

Last month a CD of late works by Elliott Carter gave me occasion to muse about the brushes with greatness I have been privileged with, thanks to my relationship with New Music Concerts. A new CD – Complete George Crumb Edition Volume 18 (BRIDGE 9476 bridgerecords.com) – gives me that opportunity once again. Although it seems more recent, I realize it has been more than a dozen years since George Crumb was last in Toronto as the guest of NMC. For several decades after NMC’s founding in 1971, a tradition developed that Crumb’s new works would receive their second performances in Toronto; in the case of the celebrated Idyll for the Misbegotten for amplified flute and three percussionists, dedicated to Robert Aitken, this city was the location of its world premiere. That tradition continued in 2003 when the composer’s daughter Ann Crumb sang the Canadian premiere of the recently composed …Unto the Hills, Songs of Sadness, Yearning and Innocence, with the New Music Concerts ensemble.

On that occasion it was my great pleasure to spend several days in the company of the 74-year-old composer and his family. In the intervening years Crumb has not slowed down much, as this disc attests, with a new work from 2012 – The Yellow Moon of Andalusia, Spanish Songbook III for Mezzo-Soprano and Amplified Piano – and recently revised versions of 1979’s Celestial Mechanics, Cosmic Dances for Amplified Piano, Four Hands and Yesteryear, A Vocalise for Mezzo-Soprano, Amplified Piano and Percussion originally written in 2005. Central to the disc is a 2001 composition, Eine Kleine Mitternachtmusik, A Little Midnight Music, Ruminations on ‘Round Midnight by Thelonious Monk for Amplified Piano, a nine-movement tribute to both Monk and Mozart performed by Marcantonio Barone. Amplification is one of the key elements of Crumb’s music, not to make it louder per se, but to make audible some of the subtle effects that the performers are called upon to execute, be it whistle tones on a flute or plucked notes or pedalled washes of harmonics inside the piano. This is very much a part of the Mitternachtmusik, along with other Crumb signature sounds and techniques, from dramatic knocks on the piano’s frame to shimmering glissandi on the strings, gentle melodies juxtaposed with brash interjections – veritable explosions of sound – and vocalizations from the pianist. Crumb’s characteristically descriptive movement titles include Cobweb and Peaseblossom; Incantation; Golliwog Revisited (with a nod to Debussy) and Cadenza with Tolling Bells.

There is another personal connection for me on this recording. The soprano in the two vocal works is Tony Arnold, who performed a stunning rendition of György Kurtág’s Kafka Fragments with violinist Movses Pogossian for New Music Concerts at Gallery 345 last season. Arnold is no stranger to Crumb’s music – she received a Grammy nomination for her performance of Ancient Voices of Children – and is in fact the dedicatee of Yesteryear. That title was inspired by a line from François Villon, “Mais où sont les neiges d’antan,” rendered most famously into English by Dante Gabriel Rosetti as “But where are the snows of yesteryear?,” a line declaimed and later whispered in the original archaic French toward the end of the 11-minute work. As the composer’s preface tells us, “the singer is vainly searching for her lost youth and beauty and laments their inevitable erosion by the relentless passage of time.” There is some ritual involved in the performance, as is often the case in Crumb’s music. In this instance, over the duration of the piece the singer moves between nine stations – spread around the concert hall in the original version but restricted to the stage in the 2013 revision.

Both Yesteryear and The Yellow Moon of Andalusia are first recordings. In the latter, Crumb returns to the poetry of Federico García Lorca, which has been the inspiration for many of his works since the 1960s, including the above-mentioned Ancient Voices of Children. While the earlier works used the original Spanish, here Crumb sets English translations of the poems. The comprehensive booklet includes both the originals and the translations. We have to thank Bridge Records for their thoroughness, not only in the preparation of this recording, which also includes the piano duo Quattro Mani and percussionists David Nelson and William Kerrigan, but for undertaking such an exhaustive catalogue of works by one of the unique voices of our time.