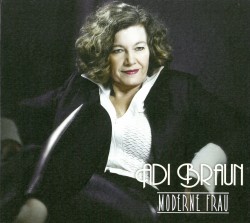 Perhaps Adi Braun is playing to her strengths on Moderne Frau. But rarely is the seduction of Weimar Berlin cabaret been performed with a sassier va-va-voom and oomph than on the 13 songs of this recording. Now that could well be due in part to the outstanding musicians on the album, but there is nothing whatsoever that can outshine Braun’s luminously sung performance. Clearly Braun’s redemptive gods are Bertolt Brecht and Kurt Weill and she makes every gesture count meaningfully on this disc, where biting satire and burlesque meet outrageously colourful art song.

Certainly the music speaks in a special way to Braun. She reveals their secrets in seductive whispers; there is a burning lust for life played out in these lyrics, especially in the music of Brecht and Weill, but Moderne Frau, the title track (her own composition), is also an outstanding example of her creativity, as is Speak Low from the pen of Weill and Ogden Nash.

Braun clearly revels in the intensity of the songs’ drama and it is this aspect of the disc that spotlights her vocals throughout. The vocalist’s larger-than-life persona is also a perfect fit for this repertoire and she isn’t afraid to push it to its limits either. The results are often more beautiful and nuanced than expected. The edgiest moments come in Mackie Messer, perhaps the defining moment on the entire disc, closely followed by the bittersweet tenderness of It Never Was You.